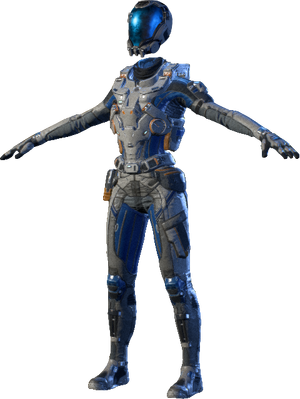 The Andromeda Initiative's mission is one of discovery and exploration, as well as colonization. Readying personnel to journey into harsh environments-and even the void of space-was always part of the plan. Thus, the Initiative's custom Deep Space Explorer (DSE) hardsuit is equipped with multiple environment seals, failsafes, a hefty liquid oxygen supply, a formidable kinetic barrier generator, and an array of scientific instruments. Although many were built, most were mysteriously lost en route to Andromeda.

The Deep Space Explorer Armor set can only be crafted and is not found in-game.

Retrieved from "https://masseffect.fandom.com/wiki/Deep_Space_Explorer_Armor?oldid=507121"
Community content is available under CC-BY-SA unless otherwise noted.