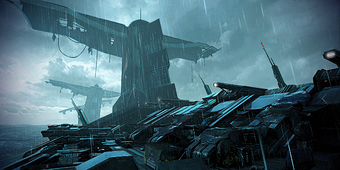 The Normandy shuttle has been disabled by an unknown energy surge. Search for Leviathan and a way to escape the planet.

This mission begins when you land on the planet.

You'll be facing a horde of infantry-level enemies as well as several armored foes. Bring crowd control, anti-shield, and anti-armor capabilities. There is also a stretch of time during which your squadmates will need to hold on their own, so choose carefully and consider bringing squadmates with high health and damage output.

If one of your squad members is also your locked-in love interest, there will be some unique romance-specific dialog involving them on this mission.

Additionally, you'll be trying to fight across the deck of a mildly-rocking ship. If you kill with scoped weaponry, bring them only if you believe your aim is good enough to compensate.

The mission begins onboard the shuttle, where you discuss amongst yourselves how a probe you sent has managed to pinpoint Leviathan's location and how you're supposed to reach it. One of your squadmates will express doubts on bringing Leviathan to aid in the war, and you can answer whichever way you want. 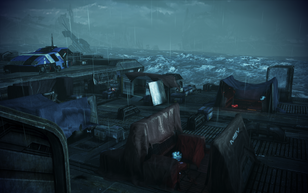 While descending on the ocean planet the shuttle will be disabled by a mysterious pulse. Cortez manages to set the shuttle down at one of the floating wrecks littering the ocean for repairs and you will have free rein of exploring the immediate surroundings.

There's a bunch of datapads by the makeshift shelters that tell the grim story of the wreck's crew, along with some items worth picking up for credits (2x pure eezo samples, 2x survey data, star charts - every piece for 2250), an Assault Rifle Omni-Blade, M-55 Argus, and a Pistol Cranial Trauma System by a seaside cranny near the shelters. There are also two Med Kits on this half of the wreck. You will also see mysterious spherical artifacts inside some of the shacks and containers; they can be shot at. 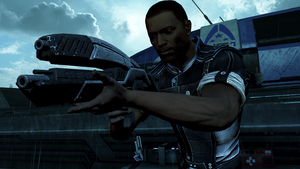 A short interval after coming down the ledge from the Kodiak, one of your squadmates points at something in the sky. A Sovereign-class Reaper is descending; enemy foot soldiers start pouring in: Husks, Cannibals, and Marauders. They will initially deploy from the opposite end of the area from the shuttle, but will later drop all along the water's edge, so stay alert for flankers. Be especially wary of the two Brutes who arrive toward the end. Deal with them until Cortez manages to complete repairs and starts providing air support.

It turns out Cortez cannot stay airborne for long due to being hit again by the pulse so he lands the shuttle at the other side of the wreck. There is a mining equipment salvage (1,500 credits) just past the part where you have to leap across. Deal with the enemies, then go over and talk to Cortez for the next part of the mission. If you haven't managed to get all items in the first pass due to having been interrupted by the Reapers' arrival, now is the chance to backtrack and get everything missed. There's an Pistol Ultralight Materials mod in another nook by the ocean, near the tarp nearest Cortez. Don't forget to take note of the M-560 Hydra by the supply stashes behind Cortez, the med kit, and the Kodiak. Don't pick it up yet: save it for later. 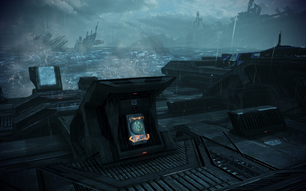 You ask Cortez for the Kodiak's status and he replies that it's inoperable. One of your squadmates suggests pickup by the Normandy, and Cortez points out the same thing will happen to the ship. Since it's impossible to go airborne or be rescued until the problem goes away you will resolve on pressing forward: find Leviathan.

Reaper forces start landing en masse again. You gain a backpack containing the power cells and you have to bring them to the sockets, stay alive while the cells are being loaded, and come back to Cortez for more until the door finally comes open (Unlike characters in multiplayer, Shepard is capable of sprinting and rolling while carrying the pack and will not drop it). One of the sockets is near the bay door itself, and another is at the seaward side of the wreck in front of the door.

You face a multifold problem here: the energy in the sockets is slowly dissipating, necessitating the need to finish as quickly as possible, and you will face lots of resistance between grabbing the cells from Cortez to the sockets. A good time to use the Hydra is when you're nearing the 100% mark and there are Brutes in the way - a panic weapon, if you will.

Once you get the door open you must use the Triton to clear out the enemies: Reapers keep falling if you insist on taking them out conventionally. You may think you've cleared out a "wave", but the Reaper overhead will simply drop others to replace what you've killed. The Triton handles like an Atlas, use your favored moves for dispatching enemies with the mech. Hordes of Brutes will spawn to test the Triton's mettle so be ready accordingly. When the enemies are dealt with walk the mech over to Cortez so he can run a systems check on it. 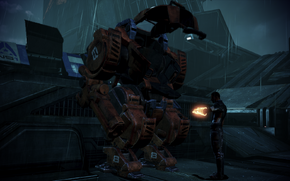 When Cortez proclaims the mech ready to go, you have a choice between diving immediately or holding off first. Now is the absolute last chance to go through any items that may have been missed if you choose to procrastinate. In the section where the Triton was stored, you can find some salvaged xenotechnology worth 2250 credits. You can always talk to Cortez whenever you are ready. Once you make the decision to dive, your squadmates will express their reservations, including your love interest if you have one and affirmed a relationship with them.

Partway through the dive you begin to lose contact with Cortez on the surface—some kind of interference is cutting you off. You spend the remainder of the mission alone on the bottom of the ocean. Take time to enjoy the surroundings, the Triton helpfully fires flares in order for you to find your way around.

Keep going down until you come across the probe you sent earlier. If the depth reading on your HUD is around 3200+ meters, you're very close. Walk the mech over to it, then it shoots another flare in the distance. A rumble issues from the chasm not far from you, go to it and prepare to meet Leviathan.

The entity you're talking to details its reasons for staying clear of the war. It gives you an outline of its race's history and you can ask it questions critical to the story. When that's done the Leviathan declares that you must remain with them while the Reapers harvest the rest. It's your job as Commander Shepard to convince it otherwise, and it will accept due to its own reasons. 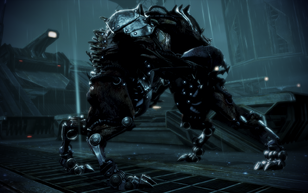 You engage the Triton's emergency boosters for the ascent and on the surface you see the fruits of your conversation with the Leviathan: a Brute turns against another and starts messing with other Reaper forces. While you escape in the repaired shuttle the Reaper shows up trying to block your path when a ship-disabling pulse hits the Reaper, causing it to crash into the ocean.

Back aboard the shuttle, you wake up and your concerned squadmates ask you what happened down in the depths. If you have an affirmed love interest with you, they will be almost frantic with worry. If Ann Bryson survived her ordeal with Leviathan relatively unharmed, you will converse with her over the shuttle's comm to end the mission.

Completion of this mission earns you the Leviathan Enthrallment Team War Asset. If Ann Bryson wasn't incapacitated, she also becomes a War Asset.