The Destined is a kett unit. Less commonly seen in the battlefield compared to Chosen, and Wraiths, they function as troop support and can harass targets at close to mid range. 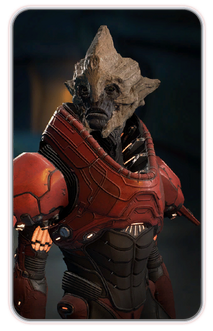 Destined are described in intercepted communications as "ancestral" kett who act as battlefield commanders. They rally infantry into tightly cohesive units, providing shield support and directing operations from the center.

The most interesting characteristic of the Destined is their ability to produce an obscuring "smoke" cloud without mechanical assistance. Preliminary study suggests Destined have internal sacs that excrete carbonate-rich compounds, which include a melanin-like pigment. When expelled into the air at will, internal acids trigger a gas evolution reaction and the pigment expands to cover the battlefield, cloaking other kett allies. While studies suggest it is not harmful, breathing the cloud for extended periods is not recommended.

Destined are armed with Hesh shoguns, high explosive (HE) grenades, and will melee attack when close.

Destined have shields, can cloak to deter visual detection, and can create smokescreens to obscure view of enemies.

Retrieved from "https://masseffect.fandom.com/wiki/Destined?oldid=513167"
Community content is available under CC-BY-SA unless otherwise noted.