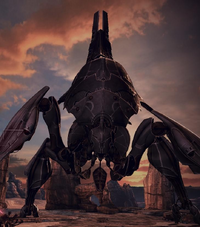 Destroyers are a type of Reaper that appear during their galaxy-wide invasion in 2186. They are approximately 160 meters in height; smaller than a Reaper of Sovereign's class, which measure over two kilometers in height. Destroyers make up the majority of the Reaper fleet and are believed to be created using harvested species that are not used to build Reaper Capital Ships.

While relatively small in stature, they still possess a formidable capacity for destruction due to their main gun being easily capable of destroying cruisers in seconds. Unlike Capital Ships, they have four main legs, along with five jointed appendages encircling their "head". The frontal plates of a Destroyer can fold to the sides, exposing a powerful beam weapon. They are used to escort the capital ships, destroying smaller targets such as frigates. On the ground, they are capable of unfolding their legs and walking to support the husks, becoming extremely powerful heavy walkers. They are nigh-immune to ground vehicle fire and not at all fragile in space, but a cruiser is noted to be able to take out a Destroyer fairly quickly.

Due to their smaller size, Destroyers are significantly more agile and maneuverable than the larger Capital Ships. In exo-atmospheric engagements, they are capable of directly landing on larger spacecraft and attacking at point-blank range.

Commander Shepard encounters five different Destroyers during the Reaper War, only four of which are seen destroyed.