The Destroyer is a large quadruped Remnant unit. It fulfills the role of heavy offense in the battlefield. It is typically seen guarding places the machines deem sensitive, or deployed in Firebases across the Heleus Cluster if initial waves of Remnant units cannot defeat the APEX intruders in the area. Its arrival on the scene, if not already there, is usually signified by a loud and continuous projectile firing audible even if it is out of sight several dozen meters away.

The Destroyer relentlessly attacks while walking towards a target, and does not flinch nor recoil from any counterattack. Despite its size, a Destroyer can jump its bulk to elevated positions and vice versa, and can even fit itself inside cramped chambers to slaughter anyone huddling within. If it cannot fit in a doorway, it will barrel through anyway, destroying the top portion. If the Destroyer is about to be destroyed, it builds up to an overload for a short period of time before its explosive destruction, dealing massive damage to anyone caught in the blast.

Destroyers also have a stronger and more dangerous variant called the Progenitor. 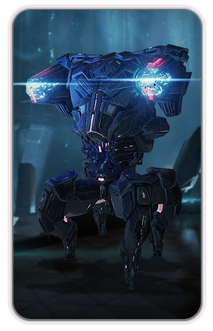 Destroyers are heavy-weapon platforms deployed against the most determined intruders into Remnant territory. Armed with a directed energy cannon and two secondary laser turrets that can engage multiple targets simultaneously, a single Destroyer can take out an entire combat squad in minutes. When asked why she named it a "Destroyer," Peebee folded her arms, rolled her eyes, and answered, "You figure it out."

One of the most disconcerting characteristics of the Destroyer is its partitioned power system. Destroying one of its turrets means that power is automatically diverted to its locomotion systems, allowing it to move much faster. Many individuals have mistakenly believed they could pick off a Destroyer’s turrets from a distance and evade it safely, only to have the Destroyer close that distance unexpectedly. This often has fatal consequences, since at melee range, the Destroyer transfers power to an electromagnetic burst that causes severe damage to any individuals unlucky enough to be close.

APEX has reported variants of the Destroyer that have a self-repair network for their turrets. These Destroyers can briefly go dormant, transferring full power to fix any damage before reactivating its turrets again. Few have been sighted, but engagement is not recommended.

The Destroyer is armed with two rapid-fire turrets, a startlingly powerful main gun, and an energy field activated at melee range which can swiftly strip one's shields if caught within. This energy field takes a moment to build up before detonating.

Its two turrets have their own strong shields and armor. Each time a turret gets destroyed, the Destroyer gains a substantial movement speed increase.

Retrieved from "https://masseffect.fandom.com/wiki/Destroyer_(Remnant)?oldid=513164"
Community content is available under CC-BY-SA unless otherwise noted.