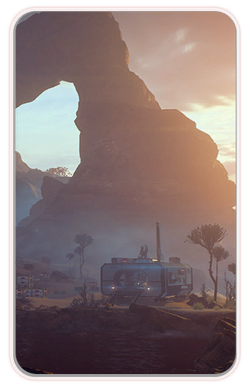 The Majordomo at Prodromos added the names of Site 1 and Site 2 casualties to the list of survivors, and something doesn't add up. There are still people missing from Promise and Resilience. Evidence might be found to explain those still missing at a number of possible emergency muster points.

After completing the prerequisite above, talk to Majordomo Bell-Scott at the main prefabricated structure on Prodromos and ask about how you can help the settlement. It turns out you're in the best position to clear this particular discrepancy, something he feels it's important to be precise on.

scattered around Site 1 and 2 on Eos. Scanning the burn marks on the ground at any of the points reveals that an Initiative shuttle took off from there, allowing for the possibility of at least one shuttle having escaped. SAM needs more information to be certain, so continue to scan the burn marks at the other sites. One of the spots is in an area with extremely high levels of radiation, however, so you may have to come back later after the radiation has cleared.

Upon scanning the fourth burn mark, Pathfinder Ryder concludes that a shuttle must have made several pickups while escaping the kett, but was unable to reach the Nexus. SAM predicts their most likely path from turian tactical pattern the pilot was using.

After arriving in the Eriksson system, scan to reveal the wreckage of a kett ship. The ship seems to have been destroyed by a collision with an eezo core jettisoned from the escaping Initiative shuttle. Scan the ship for random Salvage.

Another scan will lead to the Initiative shuttle drifting. There are indications that some of the Resilience personnel are still alive and in stasis. A request for rescue is sent to the Nexus. Scanning the shuttle awards +270 XP, +29 AVP

, +2% Eos viability, and random Salvage. The mission completes after you scan the shuttle.

You can return to the Majordomo to speak to him but nothing else is rewarded.

Retrieved from "https://masseffect.fandom.com/wiki/Doesn%27t_Add_Up?oldid=515288"
Community content is available under CC-BY-SA unless otherwise noted.