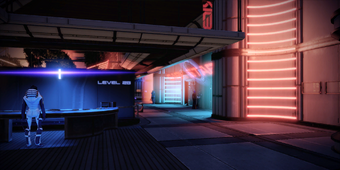 Kasumi Goto is not the most famous thief in the galaxy -- she's the best. Trained in the arts of stealth and infiltration, she has "acquired" artifacts and information from all over the galaxy and yet maintains a completely clean criminal record. She is awaiting rendezvous with Shepard on the Citadel, in the Zakera Ward.

This mission is acquired after the mission on Freedom's Progress. 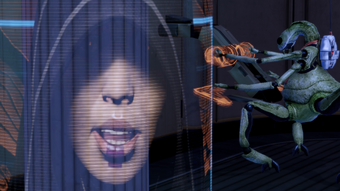 Kasumi's ad terminal isn't hard to find, it is right there when you leave the Normandy at the Level 27 Dock. Select the terminal and you begin a conversation with Kasumi, she is talking through the terminal and transmitting from the platforms and catwalks above the dock.

If you loiter by the terminal without accessing it, she recites different advertisements containing less-than-subtle references to her recruitment. If left alone long enough, she becomes annoyed and openly questions Shepard as to why she is being ignored.

Note: The password "Silence is golden" is not necessary for her acquisition. Telling her to "cut the crap" will not penalize you in any way.

Kasumi's recruitment is completed simply by welcoming her aboard, but she requires your assistance on a job regardless of your interest in the matter. Learn more about her and the context of the job by fully exploring her dialogue options instead.

You can ask about whether she has been briefed, what is with the secrecy and her history with Cerberus. Apparently Cerberus made a deal with her and when asked she gives the history of what happened and the briefing for the heist. 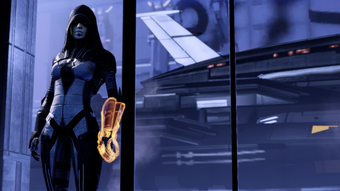 You can also ask what happened and about Donovan Hock and the plan. Apparently she has procured some evening wear for Shepard. You can ask about grayboxes and their function as well. When you have all the information you need, welcome her aboard.

When you end the conversation, the terminal sinks into the ground, and Kasumi begins talking to Shepard in person from the catwalks. As she walks away, she cloaks.

You can find Kasumi in the port observation lounge on the crew deck of the Normandy.

Note: This mission is unlike normal recruitment missions in that once completed it doesn't move forward squadmate conversations or trigger loyalty missions.