Mass Effect 2
Dr. Amanda Kenson is a human scientist from the University of Arcturus who became notable when she and her team claimed to have discovered that the construction of the mass relays pre-dated the existence of the Protheans.

Dr. Amanda Kenson made galactic headlines when she revealed controversial findings that the vast majority of mass relays in the galaxy actually pre-dated Prothean civilization. By analyzing the composition of dust trapped in the vicinity of mass relays and comparing it to dust clouds in the same system, Kenson determined that only a fraction of mass relays could be dated to 50,000 years ago; the rest were far older.

Sometime following the announcement of her discovery, Dr. Kenson embarked with an expedition team to investigate rumors of Reaper technology on the fringes of a batarian system. Kenson sent a message to a friend, Systems Alliance Admiral Steven Hackett, informing him that her team had found evidence of an imminent Reaper invasion. When Admiral Hackett later learns that Kenson has been captured by batarians and accused of terrorism, he contacts Commander Shepard, asking for assistance in rescuing her. 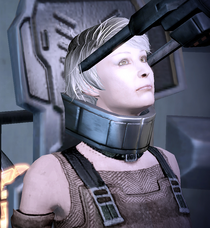 Shepard manages to break into her prison on Aratoht, first overhearing Kenson's protests at being dragged off to interrogation. According to logs, Kenson produced nothing but frenzied rambling so far, and if Shepard listens to a live feed she freely warns of the Reapers' arrival through the local relay. Defiant against torture threats, she is about to receive an interrogation tool to the face when Shepard walks into her room, knocks the guard out, frees her, and gives her a weapon. Kenson vents her anger at the guard, stomping the guy's throat before joining Shepard in their bid to escape the prison.

Kenson suggests finding a security console she can hack in order to clear a path to freedom. She and Shepard fight their way through the prison and eventually come across one. Kenson gets to work on cracking the security, leaving her defense up to Shepard. While Shepard is fighting, Kenson tells the Commander where enemies are coming from, and what needs to be done. She eventually manages to override the security, and disable the orbital tracking grid. When Shepard manages to fight off the waves of prison guards, she brings down an elevator to the cell block and she and Shepard ride it up to the hangar. During the brief ride, Kenson mentions the need to blow the locks on the hangar doors in order to get them open.

She and Shepard accomplish the objective after fighting off a few guards in the hangar. They commandeer a shuttle parked nearby. As the pair gets onboard, a few guards try to rush them, but get incinerated by the thruster exhaust when the shuttle takes off.

After engaging the shuttle's autopilot systems, Kenson briefs Shepard on the current situation. Her group, called "the Project", had discovered a Reaper artifact, which they dubbed "Object Rho", and it gave her visions of the imminent Reaper invasion. As a result, the Project planned on destroying the relay in the Bahak system, which they called Alpha Relay, by slamming a large asteroid into it. Shepard however asks to see the proof so instead of going to Arcturus Station, Kenson takes the Commander to Project Base. 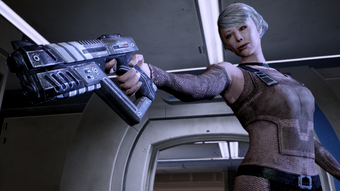 Once on the asteroid, Kenson shows the Commander the countdown clock and explains how they calculated it. There is just over two days until the Reapers arrive. She then takes Shepard to Object Rho. While on the way to the lab, she explains to Shepard that the project is ready to go, and it isn't a matter of "could [they]" but rather "should [they]".

Upon arriving at the artifact, Shepard is shocked that it is out in the open. Kenson tries to reassure the Commander they know what they are doing: if Shepard gives it a minute, the artifact will supply all the proof required. Soon enough, visions of the Reapers' arrival flood the Commander's mind.

While Shepard is reeling from the experience, Kenson pulls the M-4 Shuriken she was given earlier and points it at the Commander. She can't allow the Commander to stop the arrival of the Reapers, and guards from the project rush into the room. It is revealed later that despite their stated precautions, she and the entire project staff became indoctrinated from having spent too much time studying Object Rho. Now, they serve the Reapers and will do anything to stop Shepard from activating the project. However, Shepard isn't finished yet. In a quick move, the Commander manages to disarm Kenson and break her wrist. Kenson limps out, holding her injured arm and ordering her guards to deal with Shepard.

Kenson tries to talk the Commander down over the base intercom but Shepard still keeps fighting to the point of incapacitation. When Shepard goes down, she tells her personnel to patch the Commander up at the med lab as they still need Shepard alive. In a hazy moment before losing consciousness, Shepard briefly sees Kenson's eyes glowing, Collector-style.

Kenson orders Shepard to be sedated until the Reapers' arrival, but about an hour and a half before they arrive the Commander manages to wake up, despite increased sedative doses. Shepard fights through the guards while Kenson tries to rally and direct her guards, to little effect as the Commander eventually reaches the Project Control Room.

Once there, Shepard manages to reactivate the engines of the Project and tries to use the facility's comm systems, but Kenson cuts the Commander off. Having discarded her prisoner outfit for a scientist uniform, she berates Shepard and asks if they know what they have done. Since she can't stop the asteroid, she declares she will destroy it. Shepard asks the Project's VI where Kenson is going, and races to the reactor core module to stop her. 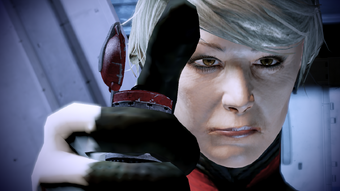 Shepard sees Kenson at the reactor, a wall of glass separating them, and she is in a frenzy of rage and anguish. She blames Shepard, claiming she will die without knowing the Reapers' "blessings" but that Shepard will just die. She leaves instructions for her guards to stall Shepard while she destabilizes the reactor. Shepard, however, deals with the enemy resistance and activates the necessary cooling rods, preventing the core from melting down. After yet another setback to her plans, Kenson tries one last thing: she can still override the power to the engines and she dares the Commander to stop her.

A short elevator ride later, Shepard finally confronts Kenson at the master control panel. She is ordered to step away from the console, but she ignores Shepard and wails more on how she "can't hear the whispers anymore." Shepard again orders Kenson to step away, but then she pulls out a detonator. She finally vents her frustration at the Commander: all they had to do was stay asleep and the current situation wouldn't have happened. Shepard can then either shoot her, or try to talk her down. Regardless, Kenson presses the detonator. The resulting explosion obliterates her body and knocks Shepard back a few feet.

Retrieved from "https://masseffect.fandom.com/wiki/Dr._Amanda_Kenson?oldid=518351"
Community content is available under CC-BY-SA unless otherwise noted.