Mass Effect 3
Dr. Ann Bryson is a Systems Alliance scientist and the daughter of Dr. Garret Bryson. She is a member of Task Force Aurora, a group created to investigate ancient legends about the Reapers.

Born in 2158, Ann used to doodle in her youth, exemplified by drawings made when she was nine: crayon drawings of a hanar and a crude rendition of her father. It is through the latter and Garret's cryptic references to keeping things "close to [his] heart" that Commander Shepard finds the decryption key to a file containing data on Reaper activity for use in tracking Dr. Garneau.

Ann leads a division of Task Force Aurora called Project Scarab that travels to the planet Namakli in the Pylos Nebula, seeking clues that might lead to the fabled Leviathan. Shepard determines her whereabouts in the course of further investigating Dr. Bryson's Lab after the mission to find Dr. Garneau, and on arriving at the planet, they find Ann pinned down by Reaper forces. Shepard is able to extract her, though sadly, her entire team is killed trying to make a run for it. Ann then shows the Commander the Leviathan artifact, only to find a trio of Marauders activating it. Ann is then possessed by Leviathan, forcing the squad to destroy the artifact.

While leaving Namakli, Shepard informs Ann of her father's death. Overcome with grief, she then returns to her father's lab on the Citadel. Shepard finds her crying in the lab and offers words of sympathy. Between sobs, Ann explains to Shepard with regret that her last conversation with her father was an argument over something trivial. She goes on to reminisce about her father, commenting on how great a man he was. Composing herself afterwards, Ann vows to find the monster that murdered her father. She asserts that though Leviathan poses a frightening picture with sensations of dark and cold upon possessing its victim, her father has taught her never to be afraid of the dark. 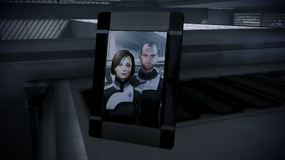 She then makes her way around the lab, occasionally reminiscing about her father. She starts explaining how the rachni's communication resembled those of the Leviathan's. She elaborates that whatever Leviathan is doing it must be using the artifacts to induce a quantum entanglement state to stimulate neural activity, similar to what the rachni do. She theorizes that Leviathan might have been preparing the rachni to fight the Reapers as rachni movements during the Rachni Wars suggest outside influence, which however is unlikely that of the Reapers since the timing is wrong.

While talking with EDI about quantum entanglement, Ann says that Leviathan's communication system is not a natural QEC (Quantum Entanglement Communicator): Leviathan has to send out a pulse to simulate the quasi-QEC effect which can be traced. She thinks the artifact only functions as a receiver most of the time and switches to a transmitter while possessing a victim. She figures that the only way to track down Leviathan would be to expose herself to the artifact in the lab.

Despite Shepard's reluctance, Ann is adamant about letting herself be taken over by Leviathan through the artifact. EDI is then able to narrow down the cluster while James Vega stands by to isolate the artifact if necessary and also to hold her in place as Leviathan took control of her. However, if Shepard prevents James from stopping the process twice, it leads to Ann's incapacitation with James walking her out for medical treatment. If she survives the ordeal relatively unscathed, she tells Shepard that Leviathan is very angry and wants to kill the Commander.

If Ann survives her ordeal relatively unscathed, she announces that she will assist Admiral Hackett after Shepard finds the Leviathans and secures their aid.

Retrieved from "https://masseffect.fandom.com/wiki/Dr._Ann_Bryson?oldid=479693"
Community content is available under CC-BY-SA unless otherwise noted.