Mass Effect 3
Dr. Brynn Cole is an ex-Cerberus scientist who studied the technology left behind by the Collectors. She is the leader of an enclave of Cerberus defectors on Gellix.

Prior to her work on the Collectors, Dr. Cole worked in physics. It was a "researcher's paradise" according to her, and she had access to cutting-edge technology. Her work on Collectors involved dissecting Reaper-to-Collector communication, and she started working on a practical human implant. However, she found out that her colleagues who had finished constructing their share of the project were disappearing without a trace.

It didn't take her long to figure out the Illusive Man's shenanigans. Since Brynn was high up in Cerberus's hierarchy, she used her relative freedom to begin planning for escape. On receiving word that four of their number are now missing, Brynn and her remaining colleagues cut ties with Cerberus and fled.

Jacob Taylor and Brynn met through a mutual friend in Cerberus's Mumbai cell a year prior to Brynn's defection. If Jacob lived through Shepard's suicide mission, fate crosses their paths once more. Brynn goes to Jacob for help and protection, and Jacob does not refuse. Eventually, they enter into a relationship, helping dozens of scientists and their families flee the organization.

Brynn's group takes refuge in a Cerberus base on Gellix, thinking that they covered their tracks well, but the Illusive Man is "one tenacious bastard". He sends troops to recapture the deserters, dealing enough damage to cripple their escape plans. If Commander Shepard manages to rescue her and the scientists, she will join the Crucible Project, using the knowledge gained during her employment with Cerberus to help build the weapon.

If Jacob didn't survive the suicide mission, though, Dr. Cole will be less trusting of Shepard, but warms up to the Commander after the latter dispatches more troops. 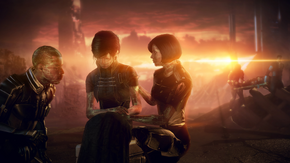 If Shepard converses with Jacob later on the Citadel in Huerta Memorial Hospital, Jacob reveals that Brynn is carrying their child. She wishes to name the child after Commander Shepard, though Jacob plans to convince her otherwise. An intercepted correspondence from Liara's Broker Terminal also reveals the depth of affection between them.

Brynn and Jacob may be seen together later if Shepard activates the Crucible, consoling a young woman amid the devastated surroundings.

Retrieved from "https://masseffect.fandom.com/wiki/Dr._Brynn_Cole?oldid=520740"
Community content is available under CC-BY-SA unless otherwise noted.