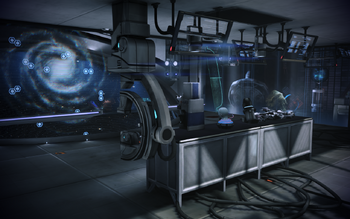 Dr. Bryson's Lab is a location in the Citadel's Presidium. It is Dr. Garret Bryson's private residence as well as the operational center for the Systems Alliance's Task Force Aurora, a research team headed by Dr. Bryson. Admiral Hackett orders Commander Shepard to visit Bryson's lab to assist his research.

The lab is a mess of research data related to Bryson's mandate to study any and all leads on Leviathan. There are pictures everywhere, even on walls above human height. In one corner of the lab, a galaxy map can be accessed for locations with potential leads and can be fine-tuned to cross-reference data points scattered in the lab. Beside it is a transparent case with a Prothean artifact and a mysterious spherical artifact, and adjoining the case is a computer terminal with a datapad containing an audio log. In front of the galaxy map is a table containing bones, a microscope, a device with a data file containing analyses on the spherical artifact, readout screens overhead, and a severed husk head that screams when interacted with and explodes when bothered too many times.

To the right of the door facing the galaxy map are two computer screens with data relating to crimes with perpetrators having no memory of committing the acts. In front of the computers and to the left of the galaxy map are storage lockers, one of which contains various paraphernalia for offworld exploration, and even more readout screens are situated above those. 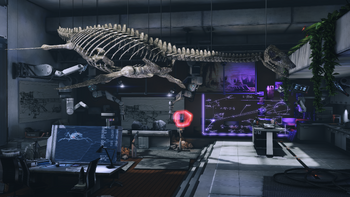 The studio adjacent to the room with the galaxy map is larger and has even more clutter. A plesiosaur fossil can be found hanging here, below it a desk with information regarding ancient rachni movements and one of Bryson's daughter Ann's drawings. Another desk below the fossil has datapads with project specifics as well as comparisons between the Thorian and Leviathan, and near the desk is a wall with creature sightings that display additional datapoints when filtered through another spectrum of light. The space next to the creature pictures wall is an area reserved for studying geological samples with element zero.

The area leading to the door outside the studio contains even more pictures and books, a couch, a computer terminal with encrypted project data, and most notably a souvenir from Sovereign when it invaded the Citadel: a Reaper fragment. 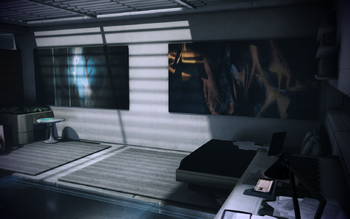 The lab is not without its comforts, however. The bedroom is located upstairs and the bathroom is located directly below it. The bedroom has audio logs proving the Batarian Hegemony's complicity in the Leviathan of Dis' disappearance as well as a video log of Ann Bryson. The space contains personal items and things of sentimental value, like another one of Ann's drawings from when she was nine years old. The bathroom has no things of significance, but the stone painting near its door is an interesting rendition of something painted by someone in the Pylos Nebula.

Retrieved from "https://masseffect.fandom.com/wiki/Dr._Bryson%27s_Lab?oldid=517262"
Community content is available under CC-BY-SA unless otherwise noted.