Dr. Chloe Michel works in the Med Clinic, located in the Upper Wards of the Citadel. Her parents were medics in the Alliance military – Michel kept the medical tradition but preferred to work in a civilian capacity. Before she opened the Med Clinic, Michel worked at another practice but was fired for giving out free medical supplies. Michel sells medical upgrades and there is a medi-gel dispenser in her office.

A badly-wounded Tali'Zorah nar Rayya stumbled upon Dr. Michel's clinic in the Upper Wards and collapsed in her arms. The doctor helped Tali into a corner and while treating her wounds became an audience for the quarian's tale of her journey and woes.

Tali had obtained information linking Saren Arterius to the geth, and she was pursued by the Spectre's lackeys all the way to the Citadel to stop her from exposing it. Tali managed to defeat the most tenacious pursuer but was shot along the way, which led to her limping to the clinic. As she finished the story, Dr. Michel assured her that she's safe for the moment.

A volus nearby was also listening to the quarian's story and mentioned that he is an information broker: he can contact the Shadow Broker to ensure that Tali's information can reach the right people. With this, Dr. Michel encouraged Tali to trust the volus. 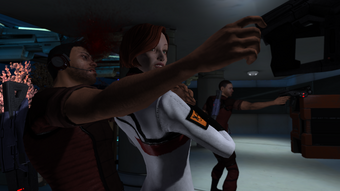 Commander Shepard is led to the Med Clinic to look for Garrus Vakarian only to find Michel under threat from Fist's thugs. Shepard's squad helps Garrus to rescue her and after being asked for the reason behind the attack, Michel tells them about a quarian she treated. The quarian, Tali, claimed to have data implicating Saren Arterius in the Eden Prime attack and was looking for a safe place to hide. Michel put Tali in touch with Fist. However, she is surprised to hear Fist has betrayed the Shadow Broker to work for Saren; she knows it is suicidal to double-cross the Broker.

When Shepard returns to the clinic, the Commander finds Michel receiving a demand for medical supplies. Upon questioning, Michel explains what happened at her last job and that someone is blackmailing her. If her past gets out, she could lose her licence and the clinic would be shut down. Shepard can offer to help by delivering the supplies to a merchant called Morlan down in the Markets, but a krogan shows up to collect them from Morlan, mentioning that he works for someone called Banes.

Once Shepard has dealt with the krogan, the Commander can ask Michel about Banes. According to Michel, she and Armistan Banes worked together a long time ago. The last she heard, Banes was working for the Alliance on a military contract. The squad suggest asking Captain Anderson, from whom they will find out that Banes has died and that the crew that found Banes' body is missing. Michel is very grateful for Shepard's help, and offers a discount on her medical goods.

In 2185, Dr. Michel sends a message to Shepard entitled "You and Garrus are alive!", provided that her blackmailing problem two years before has been dealt with. 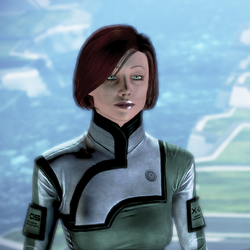 In 2186, Dr. Michel is still on the Citadel and is the human medical in-charge at Huerta Memorial Hospital. After Shepard makes it off Mars following the attack on Earth, she oversees the medical treatment of Ashley Williams or Kaidan Alenko. Shepard can choose either Dr. Michel or Dr. Chakwas to be the Normandy's doctor, though if Chakwas survived the suicide mission Shepard will have to deny her request first and then convince Dr. Michel to join the crew.

Aboard the Normandy SR-2, upon her initial examination of Shepard, she remarks that she's aware of the various cybernetic implants Cerberus used to reconstruct the Commander, although she observes that the med-bay upgrade probably cost a considerable amount. She also regrets how much more intensive her new work is, but she believes the opportunity to make a real difference with the crew is worthwhile.

After the Cerberus attack on the Citadel, Dr. Michel requests Shepard to broker a trade with Tactus, the refugees' leader on the Citadel. The refugees had an excess of medical supplies for treating wounded soldiers while the Normandy's inventory had an excess of medicine for more civilian applications. Dr. Michel explains that Tactus, wary of the Alliance military, didn't trust her, but she believes Shepard can make the trade happen. She is confident that she can use the new medical supplies to increase the efficiency of medi-gel.

Known members of Dr. Michel's family include her parents who were in Geneva back on Earth when the Reapers arrived. She also has a brother on the Citadel, who would not have known of the Cerberus attack had he not been alerted by the Citadel's broadcasts.

Dr. Michel and Engineer Greg Adams frequently converse with each other during their time aboard the Normandy. While Mordin Solus/Padok Wiks is treating Eve in the med-bay, Dr. Michel can be found at the crew quarters talking with Adams about her history with Banes. Later, she inquires about Adams' working relationship with Dr. Chakwas.

If Garrus survived the suicide mission, sometime after he rejoins the crew Dr. Michel brings him turian chocolates, saying "she saw them and thought of [him]." Michel bought the chocolates at the Citadel, and if questioned by Adams about it she just claims Garrus is a friend. She brings up the incident where Garrus saved her life at the Wards back in 2183.

Sometime after the geth dreadnought's destruction above Rannoch, Dr. Michel and Adams can be found in the mess hall, arguing about the fundamental characteristics of sentient life. Like Dr. Chakwas, Dr. Michel doesn't believe synthetics are a valid form of life, citing their inherently artificial nature.

If Shepard doesn't interact with Dr. Michel at all, she is no longer present at Huerta Memorial Hospital after the Cerberus attack on the Citadel.