Back in the Milky Way Harry accomplished everything he could. Feeling he was locked in a future with diminishing returns, he signed up with the Andromeda Initiative in a fit of mid-life crisis, wanting to wake up in the morning feeling hope instead of arthritis.

Harry has a friendship with fellow Hyperion doctor Lexi T'Perro. When he joined the Initiative, he wanted the asari to come with him aboard the human ark since she's also knowledgeable about human anatomy.

The doctor is first seen tending to Liam Kosta after Hyperion's collision with a mysterious energy cloud, joking around to check if the latter has concussions or diminished hearing. Later, he joins the Pathfinder team down to Habitat 7 to investigate the strange anomalies, riding in the shuttle piloted by Alec.

Their shuttle successfully lands on the planet but the one occupied by Liam and Ryder's offspring explodes midair. Harry later meets them again, while he and shuttlemates Cora Harper and Hayes are pinned down at their shuttle's parking site by hostile aliens. All of them fend off the intruders, although Hayes is injured in the process. Harry attends to Hayes, but an imminent lightning strike bears down on their position. Both of them are saved by Cora's biotic powers. When the other three rush off to meet with Alec, Harry spends the rest of their time on Habitat 7 trying to keep Hayes stable.

Back aboard the Hyperion's Cryo Bay, Harry offers his condolences to Ryder Jr. Alec perished on the planet while Ryder Jr. was incapacitated, and the only thing Harry thinks matters is that Alec died a hero.

In light of his experiences on Habitat 7, Harry decides to stay aboard the Hyperion. He no longer feels he can keep up with the physical demands of being in the Pathfinder team. To take care of now-Pathfinder Ryder's needs, he swaps jobs with Lexi. He takes up the responsibility of caring for the Pathfinder's comatose sibling, as well as the thousands of others still in cryostasis. 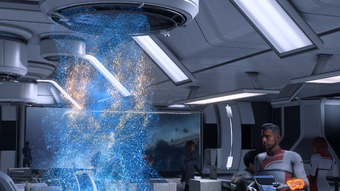 If the Pathfinder visits their sibling for a SAM-assisted chat, Harry assists from the side while Ryder converses with their twin. Harry is visibly uneasy if Ryder lies about Alec's status and Habitat 7. If talked to afterward, Harry confesses he initially doubted the possibility of "conversing" with a comatose patient, but he's amazed at the result. If Ryder agrees, Harry likens it to the time a 600-year trip to another galaxy seemed like science fiction. If Ryder is weirded out, Harry supposes that even in his profession germs were once considered a myth.

If Ryder responds to Captain Dunn's request for aid on a sensitive matter, Carlyle explains to the Pathfinder that one of his medtechs, Charlie, had secretly snuck his aunt, Ruth Bekker, onto Hyperion, past Initiative screening processes. And Ruth has a highly contagious, cross-species disease called TH-314, which remained dormant while in stasis until Charlie woke her up. Ryder's search led to Kadara, where it is discovered that angara are immune to TH-314 and Ruth had been captured by the Roekaar, who plotted to use the virus. Ryder sent Carlyle this information in hopes of eventually creating a cure or at least a vaccine.

Retrieved from "https://masseffect.fandom.com/wiki/Dr._Harry_Carlyle?oldid=518967"
Community content is available under CC-BY-SA unless otherwise noted.