Mass Effect
Mass Effect 2
Mass Effect 3
“I wanted to travel the stars, tending the wounds of tough soldiers with piercing eyes and sensitive souls. Turns out military life isn't quite as romantic as I'd imagined.”

Dr. Karin Chakwas is the human doctor of the SSV Normandy. She enlisted in the Alliance soon after she graduated from medical school, originally seeking "exotic adventure". Even after the realities of service sobered her outlook, she stayed with the Alliance out of a sense of duty to humanity, eventually earning the rank of major. Though she sometimes considers starting her own private practice, or going to work at a medical center on one of the colonies, she feels that "there is something special about working on soldiers", and believes she would be abandoning them if she did not stay. Like most Alliance doctors, she has taken courses in alien biology, enabling her to treat any non-human crew members.

Commander Shepard encounters Doctor Chakwas when she and Corporal Jenkins are chatting outside the comm room. The doctor finds Jenkins amusing - she teases that the 'action' he craves usually ends with her patching soldiers up in the medical room. After the mission on Eden Prime, when the Prothean Beacon knocks Shepard unconscious, Kaidan and Ashley carry the Commander back to the Normandy to be treated by Doctor Chakwas, because she has more experience than the civilian clinics on Eden Prime. She has a very calm bedside manner, assuring Shepard that everything looks normal, though she is perturbed by the Commander's vision and decides to add it to her report.

Shepard can talk to Doctor Chakwas later. She has worked with Captain Anderson on several missions, and respects his judgment: "he knows when to let things slide and when to crack the whip." The Commander can also ask how well she knows Lieutenant Alenko, but Chakwas responds that she hasn't worked with him before. She can offer an explanation of the medical problems L2 biotics suffer, which provides some background for assignments later on. Shepard can replenish the squad's medi-gel stocks from the infirmary where she is usually working.

After the mutiny, Doctor Chakwas says it is strange being a fugitive from the Alliance. She tells Shepard that the crew has sacrificed everything for the Commander's mission: "don't let us down." 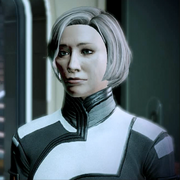 Dr. Chakwas is present on the SSV Normandy when it is destroyed by the Collectors. She managed to evacuate the ship via escape pods, along with several crewmembers. After Shepard's death, Chakwas was posted at the Mars Naval Medical Center. Missing the excitement of a starship, Chakwas joins Cerberus, getting a position on the Normandy SR-2 as the ship's Chief Medical Officer and can be found in the Medical Lab. She explains that she's not working for Cerberus, but for Shepard, in order to assist the fight against the Collectors, and making it clear that she has no regrets about it, having lived through the liberation of Shanxi, the Skyllian Blitz and more.

When Shepard asks Dr. Chakwas if she needs anything, she mentions a bottle of Serrice Ice Brandy she had lost on the SSV Normandy which she regrets never opening. If Shepard purchases a bottle and gives it to her, she'll invite the Commander to have a drink with her. Some time later, a drunk Dr. Chakwas is shown reminiscing about Corporal Jenkins and Lt. Kaidan Alenko. It is during this event that Shepard learns the real reason Dr. Chakwas joined Cerberus; it is because of Joker who will always need her help with his Vrolik syndrome, even if he never admits it. She feels that she needs stability in her life, and serving on the Normandy with Joker and Shepard brings her comfort. After the conversation, Dr. Chakwas is found passed out on one of the medical beds. The next time Shepard goes to have a chat with Chakwas, she apologizes for being a little unprofessional. Depending on how much Shepard got her to open up about her feelings, she may also give Shepard a chance to "vent." Regardless of how Shepard responds, Chakwas will then ask Shepard to promise that they'll share a bottle every year.

Email: Healing of your facial scars

Because some of Shepard's scars weren't fully healed while aboard Lazarus Station, Chakwas did some research about it and sends Shepard an email about the results and a request for some resources for the medical equipment to completely heal the Commander's scars.

Later, Dr. Chakwas and the rest of the Normandy SR-2's crew are abducted by the Collectors and taken to their base. If Shepard and the team proceeds immediately to rescue the crew and destroy the Collector base, the team will find Dr. Chakwas with the rest of the crew trapped in pods inside the Collector base and manage to free them all before they are processed alive by the Collectors. On the other hand, the longer the mission is delayed, the lower the number of the Normandy's crew remains alive, eventually leaving only Dr. Chakwas, alongside a few colonists, to be saved by Shepard and the team. Dr. Chakwas will be upset of having to watch her crewmates dissolved alive and becomes angrier the longer the team takes to find her. 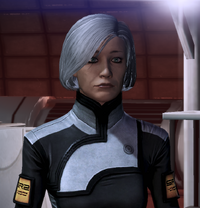 Dr. Chakwas returns in 2186, provided she survived the Suicide Mission in 2185. When the Normandy-SR2 was impounded by the Alliance, the Alliance had no clue what to do with Dr. Chakwas as she has never officially been a part of Cerberus and she had a proper leave of absence from her previous job. Though she hasn't technically done any wrong by joining Shepard to defeat the Collectors, she mentions the possibility of being tried as an accessory if Shepard was convicted as a war criminal. That aside, she has been working at an Alliance R&D lab at Shalta Wards, closely coordinating with Admiral Hackett.

When Dr. Chakwas learns of the injured squad member, she came as fast as she could to the Huerta Memorial Hospital. Shepard can find her talking with Dr. Michel at the hospital's lounge. If Shepard invites her aboard the Normandy, she thanks the Commander and she will reside at her previous place in the Normandy's medical bay. If she does not get invited aboard, she will continue her work at labs, assisting in the war against the Reapers.

When Mordin Solus/Padok Wiks is tending to Eve in the med-bay, Dr. Chakwas spends her time in the Crew Quarters, chatting with Engineer Adams. She provides words of comfort and encouragement to Adams when he blames himself for not helping the team back in 2185.

Unlike Kelly Chambers who suffers from nightmares of the Collectors' abduction, Dr. Chakwas claims to have put the events of the abduction behind her; though she does wonder about the victims and tragedies of the war. Eventually, she emotionally succumbs to her thoughts, admitting to Engineer Adams that she lied about her condition.

Chakwas holds up her annual promise to share Serrice Ice Brandy with the Commander, even though it has not reached a year since their last drink. If they share a drink together, Dr. Chakwas does not pass out this time, having learnt her lesson from being drunk the last time. She also jokingly comments that even a krogan couldn't match the Commander drink for drink.

After the mission to restart the reactors of a turian fuel depot on Cyone, Dr. Chakwas and Engineer Adams are found in the Mess Hall, arguing about the fundamental characteristics of sentient life with reference to the geth and the Reapers.

If Dr. Chakwas wasn't sent away to assist in building the Crucible, she misses out on attending Shepard's big party on Admiral Anderson's former apartment. An emergency medical consult somewhere on the Citadel demanded her attention, and Samantha Traynor relays her apologies to Shepard. Apparently the doctor also sent some fancy liquor, though Shepard never got to taste it.

If Shepard does not talk to Dr. Chakwas before Cerberus' attack on the Citadel, she will no longer be present at the hospital.