Dr. Lexi T'Perro handles the medical needs of the scout ship Tempest's various crewmembers. Her wisdom and experience allows her to act in an advisory capacity to the Pathfinder, in addition to evaluating their physical and mental well-being. She conducts her business with due professionalism, although sometimes her caring and compassion goes over it.

Dr. T'Perro is 275 years old. She possesses a dry sense of humor, has a sort of a rivalry with Peebee, and a bit of a crush on Drack.

Lexi grew up on Omega. Her mother was a dancer and her father was a turian bouncer. She spent a lot of time patching up her father's injuries and discovered she was good at it, which led her parents to spend every credit they had to get her the education she needed to become a doctor. She lost both of them in a turf war at some point before she joined the Andromeda Initiative.

Lexi's thesis on krogan virility and aggression in particular allowed her admittance into the Initiative. She also struck up a friendship with Dr. Harry Carlyle, whom she met at a medical convention on the Citadel. When Lexi and Harry joined the Initiative, he insisted that she come with him on the human ark Hyperion, which she was eligible for due to her knowledge of human anatomy.

Lexi is one of the first people to reawaken aboard Hyperion after its 600-year voyage through dark space, helping others through their own post-cryostasis issues. Just after finishing the medical checkup on one of Alec Ryder's children, Lexi is in the middle of telling them to hang around while their twin's being revived when the ark hits something big enough to cause momentary gravity loss. She then hurries over to the Ryder sibling's cryopod, and diagnoses that they'll have to stay in a medical coma since the revival procedure was interrupted. 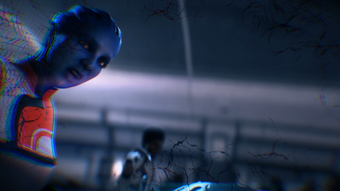 After the planetside mission on Habitat 7, Lexi attends to the nearly-dead younger Ryder. The human is having a seizure due to their SAM implant overloading, so she orders them brought to SAM Node for a hardwire connection. Upon Ryder's reawakening she once again performs basic checkups, though her expression says more than her words when Ryder inquires about their father.

Lexi explains that SAM is now part of the younger Ryder in ways even they don't understand. Pathfinder succession is a moot issue, since trying to untangle Ryder and SAM's connection could kill the former. She recommends bed rest for Pathfinder Ryder, though Cora Harper only allots two hours due to the impending rendezvous with the Nexus.

Later, Lexi takes Dr. Carlyle's place as Pathfinder Ryder's personal physician. She always wanted a field posting and thought she'd only be waking up colonists, but the presence of hostile aliens and environments moved things a bit too fast to her liking. Since she's a specialist in alien biology, she finds that there are plenty of opportunities to dissect kett specimens in tagging along with the Tempest crew rather than back at the Hyperion.

Ryder can flirt with Lexi, but the doctor explains that the human just isn't her type. She's averse to forming romantic entanglements with her patients as she needs to look at them objectively and without distractions.

Lexi acts as a confidante for the Pathfinder when discussing Alec Ryder's hidden memories and offers counsel.

Following Moshae Sjefa's retrieval from Voeld, Lexi attends to her and, before leaving to let Ryder talk to her, advises treating her gently as she's in a fragile state. 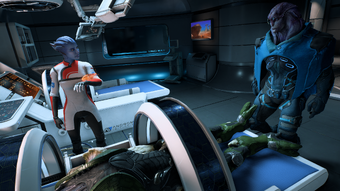 Sometime afterward, Lexi invites Jaal Ama Darav to the medbay and presents her findings about exalted kett. After running hundreds of scans on a Chosen corpse, Lexi has determined that nothing of the original species remains, save for a few traces of genome. She disagrees with encouraging Jaal to hold out hope fixing them as the process is permanent.

If Ryder agrees, Lexi explains grief is never easy. If not, Lexi thinks they'll only make Jaal's grief worse. If Ryder encouraged Jaal but began having second thoughts after hearing Lexi's point, she reasons it's because they see Jaal as a friend, not a patient, and it's her job to observe and treat. Whichever the case, Lexi reiterates she's responsible for the crew's welfare.

Ryder agrees she's good at her job, and/or reminds her of her desire to study the unknown, and she got just that with a new alien species on her table. She shares her hands actually shook while making the first incision. Kett bodies were unlike anything she's ever seen before—centuries of gene-stealing and crafted evolution—and she deems it horrible but fascinating. Beginning to feel more comfortable in her role as Tempest doctor, Lexi starts cleaning up before the body starts to smell.

Due to the Pathfinder team's rather active lifestyle, Lexi can be overheard on comms recommending increased caloric intake for everyone. Peebee complains about eating more from cans, and Vetra reminds her even with trade from Aya and Kadara they still don't have enough to augment their rations. Lexi's confident the team can find a way.

After the escape from the Archon's flagship, Lexi voices her disapproval with SAM killing and resuscitating the Pathfinder.

While Ryder is in the Paradise on Elaaden, they can assist Lexi in deducing the stasis pods on the Arks led to chemical imbalances in the brains of some of the passengers, leading to the violent behavior of the Nexus Exiles who would go on to plague the Heleus Cluster as scavengers and outlaws.

Once the Tempest takes flight again after Landing Day celebrations in Port Meridian, Lexi pesters Ryder again with more medical exams if the human visits the medbay, in light of the significant physical and mental stresses the Pathfinder experienced recently. If Ryder sarcastically insinuates a headache coming up, Lexi no longer rises to the bait owing to her familiarity with the human. If Ryder claims normalcy, the doctor then claims the human no longer was ever since Habitat 7. While Ryder grudgingly complies with her prodding, Lexi announces that she has been offered a posting in the Nexus by Professor Herik. Her research on kett anatomy has proven to be useful for the militia.

Regardless of Ryder's responses, Lexi has already turned the transfer down. If Ryder takes the news flippantly, Lexi snarks back that no other doctor would want to take on the Pathfinder. If Ryder tacitly allows her to go, Lexi reasons she does her best work out in the field, and she muses someone needs to look after the Pathfinder. If Ryder expresses gratitude, Lexi concurs they both lucked out being in the Tempest at the same time. If her lifesaving skills are praised, Lexi highlights the two times Ryder "died" under her watch - technically three times, but she doesn't count the first one as Dr. Carlyle was the attending physician then.

First message received after speaking with Lexi on the Tempest.

Received upon return to the Tempest after activating the Remnant vault on Eos.

Received after the conversation with Jaal about exaltation, if he was told exaltation is permanent.

Received after the conversation with Jaal about exaltation, if he was told there's hope to reverse the process.

Retrieved from "https://masseffect.fandom.com/wiki/Dr._Lexi_T%27Perro?oldid=527451"
Community content is available under CC-BY-SA unless otherwise noted.