Mass Effect: Andromeda
“My senses tell me what the world is. Science shows me how it came to be. And religion tells me why.”

Dr. Suvi Anwar is a member of the Nexus science team, and holds advanced degrees in astrophysics and molecular biology. She is also the Tempest's resident science officer[2]. She is simultaneously a woman of science and a woman of faith, having lived her life seeking to justify two backgrounds.[3]

Suvi is also a potential romantic interest for a female Ryder.

In a screening interview, Suvi stated that she was from a "large, rather boisterous family" of five children. Her neuroscientist mother and mathematician father exposed her and her siblings to science from a young age, which sparked a lifelong love of the subject. She declares that there was no hesitation on her part in signing up for the Andromeda Initiative, once she learned of its existence, owing to a desire to see and experience more than one small corner of the vast universe.

In one idle conversation with Tempest helmsman Kallo Jath, Suvi mentions meeting Jien Garson once. She shook the Initiative founder's hand during a fundraiser and babbled something about wanting to "look under her dress". She was marveling about the engineering of the smart textile since it changes colors in response to sound, but unfortunately she took too much champagne and her words came out like it did.

Suvi is noteworthy for her strong religious beliefs, something that has frequently drawn the scorn of her more conventional colleagues over the course of her career. She believes that a divine intelligence lies behind all creation, akin to the Deist "clockmaker god", and her work as a scientist serves to uncover that plan underpinning the many wonders of the universe; for her, no contradiction exists between being a woman of science and a woman of faith.

Suvi came to Andromeda as one of the 20,000 colonists aboard the Nexus, and was awoken from cryo shortly after the Nexus Uprising to replace an exiled member of the Nexus science team. In the dark days following the Uprising, her opportunities for scientific research were painfully limited, her efforts spent mostly on projecting the sustainability of the station's dwindling food supplies and determining which of the active colonists were to be considered the most essential, activities she does not look back on fondly. With the arrival of Ark Hyperion to the station, Suvi is assigned to the Tempest as its science officer.

Suvi takes her place in the Tempest's bridge along with Kallo Jath. Whenever the ship first arrives at a system in the Heleus Cluster she and Kallo often share their assessments and tangentially-related observations about the area. She operates the ship's primary sensor array and its probe bay, and will alert Ryder of any anomalies that demand investigation. Suvi also remains in constant contact with her colleagues aboard the Nexus, forwarding any discoveries made in the field by the Pathfinder team for further study in hopes of more efficiently solving the mysteries of Heleus. 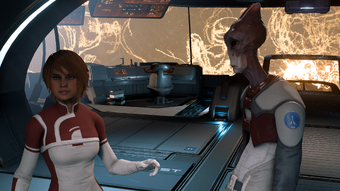 Sometime after the Eos vault's activation, Suvi receives a confirmatory report that the radiation levels on the planet are steadily dropping. Unfortunately, the kett there have also benefited from the change, and consequently step up their activities. When Ryder comes to the bridge Suvi and Kallo both relay the news to the Pathfinder. In Kallo's excitement to revisit the world Suvi learns he views her as his best friend, and she appreciates the thought.

Ryder can catch Suvi at the tail end of a comm consult with Dr. Lexi T'Perro. If Ryder takes issue with Lexi's "rules", Suvi defends her and claims without Lexi she would still be wheezing and trying not to choke on her fattened tongue. Suvi performed the "lick test" on a Heleus rock while distracted, which inflamed the insides of her mouth. As the swelling has gone down and she's able to talk normally again, she explains to Ryder the specifics of a lick test in geological settings, recalling when as a kid she would go out with her father on "expeditions" and performing the lick test was part of making the science fun.

Suvi's then reminded of Ryder's scientist mother, and inquires about her. She's impressed how Ryder's parents managed to accomplish a lot in a short time, and she calls SAM an astounding achievement. She then recalls how her own parents told her they were proud of her, and then lived out their lives while she slept. If Ryder tells her everyone knew what would happen, Suvi confesses to accepting it intellectually but living through it is another thing. If Ryder assures her her parents knew it takes a lot of courage (and some crazy) to pursue science in another galaxy, Suvi chuckles and is grateful for the Pathfinder's pep talk.

Later, Suvi steels herself for eating local things, reasoning sooner or later they'll have to if they're going to live in Andromeda. Even though she has determined her samples are non-toxic, Kallo comms Lexi to attempt to dissuade her. When the doctor chimes in with a warning, Suvi's flustered Kallo told on her, and playfully uninvites him from all her parties.

After learning about exaltation, Suvi deems kett genetics as bizarre, horrifying, and fascinating, all at once. If Ryder commands her to learn what she can, she's already on it. If Ryder posits the kett are likely studying the Initiative races' genetics while she's poking around theirs, Suvi dryly declares she's never sleeping again.

Several weeks after the Archon's final defeat, Suvi is impatient to explore Meridian's inner workings, but Ryder's team hasn't gotten the clearance yet to proceed. She thinks people fear they'll inadvertently mess up something.

Ryder can begin flirting with Suvi from their first meeting. If the Pathfinder is male, she politely refuses his advances as she wants to keep things professional. She responds favorably, however, if Ryder is female.

The next flirt option can be taken anytime between their first meeting and finding the salarian ark. If Ryder confesses she finds Suvi "really cute," the science officer then says the feeling is mutual (although Kallo becomes uncomfortable in the process).

After the rescue of ark Paarchero from kett forces, talking to Suvi prompts her to invite Ryder for a break. She makes Earth tea in the Pathfinder's quarters and becomes upset, expressing regrets about leaving her home and family. If Ryder has flirted with her previously, it becomes possible to kiss her. Suvi asks whether she "really means it," and saying yes will allow them to officially become a couple.

After the events at Khi Tasira, Suvi invites Ryder to the Nexus tech labs to show off her simulation of the building blocks of Heleus life, derived from scans of Jardaan prototypes. Things like these are what she came to Andromeda for, and she's just getting started. Ryder is impressed and calls it beautiful, which she also takes to mean Suvi's passion or intellect. The Pathfinder is a bit jealous, but Suvi reminds her she doesn't have to be. Regardless of whether their beliefs often clash or are in sync with each other, even with science as her calling and passion, Suvi deems Ryder her home. They then lock the door and proceed to make out inside the lab.

During the decommissioning and repurposing of Hyperion into Port Meridian, Suvi informs the Pathfinder she's excited to be working with the angara on a joint research body currently being set up. If Ryder offers a hug, Suvi feels a bit bashful over the number of people around. Even if she knows things aren't perfect, she's just content and happy with the Pathfinder by her side.

Received after speaking with Suvi and agreeing with her religious views upon returning to the Tempest after activating the Remnant vault on Eos:

Received after speaking with Suvi and questioning her assertion that a divine creator must exist upon returning to the Tempest after activating the Remnant vault on Eos:

After locking in a romance with Suvi:

After completing Meridian: The Way Home:

Retrieved from "https://masseffect.fandom.com/wiki/Dr._Suvi_Anwar?oldid=525878"
Community content is available under CC-BY-SA unless otherwise noted.