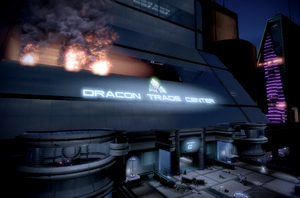 The Dracon Trade Center is an office building in Illium. It contains offices for several corporations, including Baria Frontiers, ExSolar Shipping, Eldfell-Ashland Energy, and Nezo Transportation. The building also contains a security office, a diner, and the salarian embassy.

After the explosions, the Shadow Broker's private army enter the building to kill any survivors (including Sekat and Liara), where they are stopped by Commander Shepard.

Retrieved from "https://masseffect.fandom.com/wiki/Dracon_Trade_Center?oldid=517995"
Community content is available under CC-BY-SA unless otherwise noted.