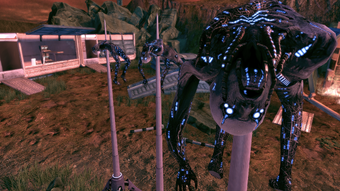 "Dragon's teeth" is the nickname Alliance marines have given to the huge spikes that geth use to turn human corpses – and unfortunate living victims – into husks. Their function resembles ancient methods of execution by impalement. The name comes from Greek mythology, specifically Jason and the Argonauts; when a field was sowed with the teeth of a dragon, each tooth sprang up as a soldier.

Dragon's teeth are comprised of a tripod-like support and a metal spike that retracts when not in use. It is speculated that this retraction could serve as a trap, activating to impale anyone who approaches the tripod, as dragon's teeth are often found in use where there have been no geth to operate them.

The devices convert the muscle, organs, and water content of a corpse into cybernetic parts – possibly recovering a miniscule amount of nutrients – then reanimate the body with an electrical charge, turning it into a simple-minded husk that attacks anyone who gets close enough. Releasing the new husk also retracts the spike back into the tripod, ready for re-use.

The technology behind the dragon's teeth is a mystery. It doesn't resemble any other geth technology and deploying the spikes seems to be a lot of effort for a minimal result, though their psychological effect on soldiers is undeniable.

Dragon's teeth have been found in systems far removed from geth space. Shepard also found a cache of dragon's teeth that had been buried on Trebin with no hint of who put them there or when. 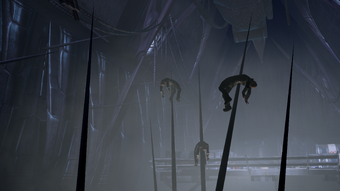 The geth are clearly stated to have gained their dragon's teeth from the Reapers. Dragon's teeth are also found aboard a Derelict Reaper.

Data recovered from the Sanctuary husk experiments explain that husk conversion is accelerated by the amount of adrenaline (or the cross-species equivalent) in the subject. Adrenaline is used as the delivery medium for nanites in the conversion process. The more adrenaline the victim has when the conversion process begins, the faster and more efficient it becomes. Therefore, the shock generated from the victim's impaling would cause an increase to the amount of adrenaline in their system.

Retrieved from "https://masseffect.fandom.com/wiki/Dragon%27s_teeth?oldid=468171"
Community content is available under CC-BY-SA unless otherwise noted.