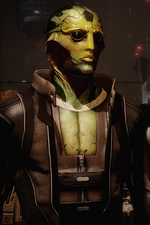 The drell are a reptile-like race that were rescued from their dying homeworld by the hanar following first contact between the two. Since then, the drell have remained loyal to the hanar for their camaraderie and have fit comfortably into galactic civilization.

Drell are omnivorous reptile-like humanoids with an average lifespan of 85 galactic standard years. Drell appearance is very similar to asari and humans, but their muscle tissue is slightly denser, giving them a wiry strength. They appear to have five fingers on each hand, albeit the ring and middle fingers are fused. Their skin is apparently infused with a venom mild enough to be served in drinks, and may cause mild hallucinations on "oral contact". They also have two sets of eyelids, akin to the nictitating membrane possessed by certain animals such as reptiles. The inner lid is milky-white and closes from the left and right, while the outer lid is black and closes from top and bottom. Much like humans or asari, drell possess the ability to shed tears.

Sexual dimorphism among drell appears to be roughly analogous to humans. Females have breastlike protrusions, and their head "frills" are more pronounced than males'. 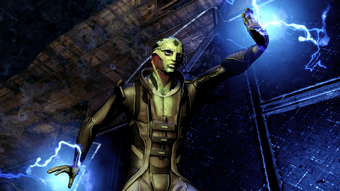 Because the drell ancestors emerged from arid, rocky deserts, the humid, ocean-covered hanar homeworld of Kahje proved tolerable only when the drell stayed inside a climate-controlled dome city. The leading cause of death for drell on Kahje is Kepral's Syndrome, caused by cumulative long-term exposure to a humid climate. This syndrome erodes the ability of drell lungs to take in oxygen, and eventually spreads out to other organs. It is noncommunicable, and there is currently no known cure, though leading hanar scientific authorities are working on creating a genetic adaptation.

The drell possess eidetic memory, an adaptation to a world where they must remember the location of every necessary resource (vegetation, drinkable water and prey migration paths) across vast distances. The memories are so strong that an external stimulus can trigger a powerful memory recall. These recalls are so vivid and detailed that some drell may mistake it for reality. Thane Krios, for example, remembers every assassination he has ever performed and can describe them in flawless detail, and says he prefers to spend a lonely night with the perfect memory of another. This process can be involuntary.

The drell ancestors emerged from dry, rocky deserts on the barren world of Rakhana. Around the 1380s CE, the already-arid drell homeworld began its swift descent into lifelessness due to disastrous industrial expansion. At the time, the drell lacked interstellar flight capacity, and with their population bursting at eleven billion, they faced certain doom.

It was around the 1980s CE that the hanar made first contact with the drell race. In the following ten years, the hanar would transport a total of 375,000 drell to the hanar homeworld, Kahje. The remaining billions left on Rakhana would perish on their dying planet, warring against each other for diminishing resources. The drell now thrive co-existing with the hanar and have been a part of galactic civilization for roughly two centuries.

Several drell serve in Adept, Vanguard and Infiltrator roles against the Reapers during the machines' galaxy-wide invasion in 2186.

If Kahje has been saved through the efforts of Commander Shepard, the hanar repay the action by sending their best drell combat specialists to aid the war effort.

Starting Over in Andromeda[]

Over 4,500 drell signed up with the Andromeda Initiative and departed the Milky Way aboard the quarian-led ark Keelah Si'yah in 2186, just barely escaping the Reaper invasion and unaware of the event.

567 years after launch, a full 10.1% of the drell contingent has been discovered dead inside their cryopods, with the number still rising. Through the investigative efforts of Anax Therion, it's discovered that the most extroverted among the drell were unwittingly used as infection vectors in a plot to decimate the major Initiative races upon arrival in Andromeda: capsules scented with usharet flowers from Rakhana were installed on their pods carrying a bioengineered virus supposed to be nonlethal to drell. Unfortunately a temperature control error caused the virus to incubate and mutate slowly until it became lethal inside their hosts, and due to the ark's operating procedure with a multispecies skeleton crew it learned to jump hosts from drell to other species.

Further along, a mass deactivation of cryopods ensure the spread of the virus through awakened passengers. Amid the chaos in other races' habitats, the drell survivors maintain discipline by quarantining their infected inside Singularities.

The crisis is averted with the invention and distribution of a cure.

The debt of gratitude that the drell owe the hanar is referred to as the Compact, which the drell fulfill by taking on tasks that the hanar find difficult, such as combat. Any drell may refuse to serve, but as being requested to serve is a great honor, few turn down the offer.

Most drell are content to live on Kahje. They are afforded every opportunity to thrive by the hanar, yet some outsiders and even some hanar regard the drell as second class citizens. However it is quite the opposite, they have integrated themselves into every level of hanar society as respected, productive citizens. 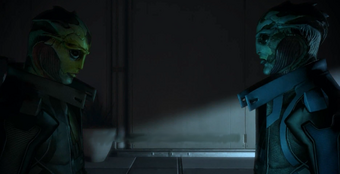 Those who leave Kahje tend to be adventurers. These solitary drell travelers often seek out new species elsewhere, and in turn adopt that species' culture. Such drell number in the thousands, and are scattered across the galaxy, tending towards quiet, integrated lives.

Some drell grow a close, personal relationship with the hanar, so much so that the hanar will even tell the drell their "soul name". Drell have adapted to communication with hanar by getting implants in their eyes to allow them to observe the bioluminescence the hanar use for communication. Drell such as Thane are able to see ultraviolet light as a silvery color, though might lose differentiation between colors at the opposite end of the spectrum, such as the difference between dark red and black. 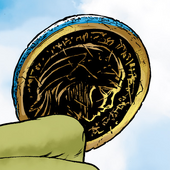 Most drell are deeply religious, believing that they have souls separate from their bodies. They see death as a departure from the body, and they also state that a person's body and soul form a Whole. When the soul is traumatized or otherwise disrupted, or the body is ill or injured, a person is no longer Whole. They also believe that their body can be directed as a separate entity from themselves, in the case of Thane Krios taking no responsibility for his numerous killings, which were ordered by the hanar.

The drell religion is also polytheistic, with the drell having multiple gods whom they pray to in varying situations. This religion includes at least three gods: Amonkira, Lord of Hunters; Arashu, Goddess of Motherhood and Protection; and Kalahira, Goddess of Oceans and Afterlife.

Many of the older traditions of the drell have begun to die out. The younger generations no longer believe the old ways of their ancestors can help them now, with so many other ways to interpret one's place in the universe. Many drell have embraced the hanar Enkindlers or the asari philosophies.

Little is known about drell language except for a few non-translatable terms.