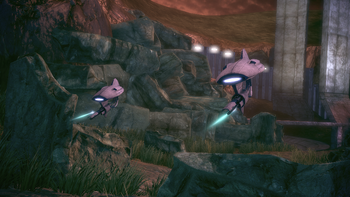 Drones are small, lightly-armed combat robots equipped with very small mass effect fields that allow them to levitate. They are also equipped with basic VI programming allowing them to adapt to changing situations on the battlefield, and have a small amount of shielding.

Combat drones tend to be deployed in wings as 'cannon fodder', creating distractions for marines to operate safely. Soldiers refer to friendly drones as 'flocks' and enemy drones as 'swarms'. Drones are a key element of the Alliance's military initiative, but they are also used by the geth. 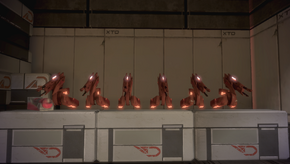 These are encountered as part of the UNC: Rogue VI assignment on Luna. 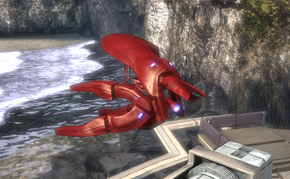 It isn't known if the drones the geth use are, like Geth Armatures, individually sentient or not. Either way the geth seem to view them as expendable resources.

Several types of drones are encountered during Shepard's mission to Stop the Collectors.

Several types of drones are encountered during Shepard's mission.