“I always work at optimal capacity.”

EDI is voiced by Sasha Grey.

EDI is a Quantum Blue Box type AI that functions as the electronic warfare defense for the Normandy SR-2. Because of the potential danger of a rogue AI, she has been given behavioral blocks and cannot interface with the ship's systems. She also serves as the Illusive Man's eyes and ears on the Normandy, monitoring the many listening devices on board and sending regular reports to him.

The Illusive Man restricted Commander Shepard's access to some of EDI's files and capabilities for unknown reasons, although EDI surmises that the reason is probably because he does not want Shepard to know everything about Cerberus just yet. It is only later in the game, after acquisition of the Reaper IFF and its integration with the SR-2's systems, that a virus disables the ship and enables the Collectors to board and capture the entire crew. While Shepard and the squad are away, Joker grants EDI access to the ship's full array of systems, allowing them to escape. EDI will also reveal that the Normandy SR-2 was built using technical diagrams of the SSV Normandy, which was built by the Systems Alliance upon the encouragement of Cerberus. The SR-2 was assembled using parts bought from various vendors, and built by Cerberus in a remote area of the Voyager Cluster.

EDI also gains access to "Anti-Reaper Algorithms" later in the game, and states that she devotes significant processing power to analyzing them. When pressed on this subject by Shepard as to how she could hope to combat beings millions of years more advanced, she reveals that she was in part designed by technology gained from Sovereign's remains and thus, at least partially, based on Reaper technology herself. 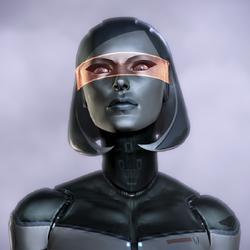 Following Shepard's defection from Cerberus, EDI aids the crew in eluding the Illusive Man by blocking his technicians' attempts to track the ship. When the Normandy SR-2 is placed in the possession of the Alliance, EDI pretends to be a simple VI to hide her true nature, out of concerns that Alliance engineers would attempt to remove her.

On Mars, Shepard's team recovers a Cerberus synthetic, an android masquerading as "Dr. Eva Coré". EDI assists in extracting vital data from the unit, and in the process, she seizes control of the body. This allows her to serve as a squadmate on missions. She shares many of her powers with the Engineer class, such as the abilities Incinerate and Overload and is proficient with Heavy Pistols and Submachine Guns. Her unique ability is Decoy.

While EDI is visiting the Purgatory Bar, Shepard has the opportunity to inquire about the technical specifications of her new body. According to EDI, the hair and face are comprised of a flexible alloy that mimics certain organic features, such as healing and softness. As an additional feature, these parts can harden to protect the synthetic brain inside from damage. EDI also mentions that the hair can change shape or form; as a default she has set the hair to "protection mode", a hard shell encasing the skull in the manner of a helmet. But should she choose to do so, she could separate the strands and have actual hairstyles. But there is a technical drawback: if the synthetic strands become wet, they cannot hold the pattern set by the control program. EDI's exact comment is "I can't do a thing with it".

If EDI is taken on the geth dreadnought mission in the Far Rim, she will be shocked and upset at what has happened to Legion. After Legion is freed and allowed onto the Normandy, it will comment on EDI's platform--stating that her body is "inefficient because it is top-heavy and lacks an external epidermis which would be necessary for infiltration." If peace is made between the quarians and the geth after the destruction of the Reaper Destroyer on Rannoch following the Reaper Base Mission, EDI will clearly be sad after learning of Legion's sacrifice for its people.

If Shepard decides to let the geth be wiped out during the campaign for Rannoch, EDI will become disquieted and pensive about Shepard's decision. During a subsequent conversation, she questions Shepard about the meaning of synthetic life, and states her belief that Shepard would unhesitatingly sacrifice her instead of Joker if such a dilemma arose. She does not blame either Joker or Shepard for their feelings, but merely states that they choose that which they find familiar; she then comments that they are not alone in that mindset, possibly alluding to the geth and their decision to serve the Reapers.

Alternatively, EDI will thank Shepard should the geth be spared or peace be obtained.

Near the end of Mass Effect 3, Javik and EDI will have an argument in the Normandy's AI Core that Shepard can intervene in. Javik states that EDI should be destroyed because he will refuse to place any faith in trusting a machine because of his hatred of all synthetics. EDI will counter by claiming that she has every right to exist and that the Protheans were brutal imperialists who enslaved weaker species and ruled the galaxy with an iron fist.

During the assault on the Cerberus base, Cronos Station, EDI directs Shepard to research logs that reveal that EDI was born of the rogue Hannibal-class VI from Luna, with additional engineering from Reaper technology.

If Shepard chooses the control or synthesis endings, EDI will be present with Joker for the ending cutscene if Shepard had motivated them to be together before. EDI may also be present in the destroy ending. [1]

“I enjoy the sight of humans on their knees... That is a joke.”

Joker and EDI interact on the Normandy's bridge
As an AI, EDI's behavior goes far beyond that of typical VI interactions, with the ability to act independently and interact on a social level with the crew- not unlike any other sentient being. After being unshackled, she is also capable of modifying her core programming, and as a result, can upgrade and evolve on her own.

After EDI interfaces with the Normandy, she is taken aback by her newfound sense of freedom to experience the world around her, saying that the change is like having worn gloves all your life only to suddenly have them removed. Philosophically, she likens the ship to being her body, the drive core her heart, and the sensors her eyes.

Despite being a machine, she feels emotions and has instincts, though they are not precisely the same as the emotions of organic races. Due to Cerberus's programming, she is able to feel curiosity, has survival instincts, and forms bonds with the passengers aboard the Normandy. She is also able to feel positive feedback, akin to happiness, when she does something she enjoys, allowing her to develop preferences.

During the course of the war with the Reapers, EDI struggles to reconcile the observed behavior of organics with her own understanding of life, particularly in the face of the actions of another synthetic race, the Reapers. Through conversations with Shepard, EDI can be convinced that life is not simply the pursuit of self-preservation, causing her to alter her own programming accordingly. After completing the Sanctuary Mission on Horizon in Mass Effect 3, EDI will state to Commander Shepard that she is repulsed by the Reapers and their goal of destroying all organic life in the galaxy and even more dedicated to stopping them. At this point, EDI vows that she would willingly give her life to protect Joker because he risked his life to unshackle her when she was disabled by the Reaper IFF integration in Mass Effect 2, which she claims was similar to being freed from slavery.

One notable trait of humanity that EDI develops, particularly after being unshackled during the Collector intrusion into the Normandy, is her propensity for humor. She frequently makes comments of an intentionally humorous nature, appending such comments with the phrase "That was a joke." This sense of humor could also be described as poor, as her jokes — delivered in a deadpan manner — are often disconcerting rather than funny. At one point, EDI attempts to use humor to calm Shepard after sensing that Shepard's biometrics indicated an extreme level of stress. In London, at the Forward Operating Base, if Commander Shepard speaks to her, EDI will state that for the first time in her existence, she feels alive and that she will do everything she can to stop the Reapers thanks to Shepard's trust and faith in her. 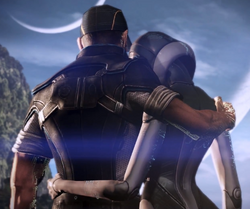 EDI's most important relationship is with Joker. As the Normandy's pilot, he is directly responsible for the ship's well-being, and, by extension, hers. At first, Joker is apprehensive of EDI, believing that starships can operate well enough without an AI's assistance. However, as the game progresses their relationship improves, though they pick on each other. After the attack by the Collector Cruiser on the Normandy, EDI states that she and Joker have developed an "equitable working relationship". After the final mission, EDI states that they have developed a kind of platonic relationship, which she surmises is not related to any kind of hormonal attraction on Joker's part. This is reflected in how they address each other- at first EDI calls Joker "Mr. Moreau", but later starts calling him Jeff, and Joker at times responds to EDI as "mom", reflecting his viewpoint of the relationship. After the Collector attack, Joker also begins referring to EDI as "her" and not "it".

Once EDI acquires a body, her relationship with Joker develops further. Both EDI and Joker seek advice from Shepard about pursuing a romance. At Shepard's prompting, the two of them will enter into a relationship.

Retrieved from "https://masseffect.fandom.com/wiki/EDI?oldid=317864"
Community content is available under CC-BY-SA unless otherwise noted.