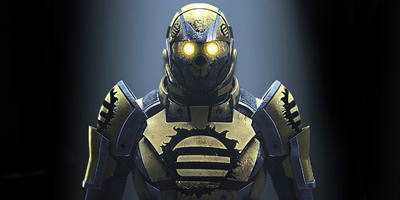 Eclipse is a mercenary corporation that was founded by asari commando Jona Sederis. The organization provides effective security and firepower for prospective employers; they have few scruples about the nature of those who hire them, so long as they can afford their services. Eclipse mercenaries work in teams of troopers and vanguards which may be led by more experienced commando units.

Eclipse in general favors stealth, discrimination, and "intelligent" ways of conducting battles. They are not as disciplined as their more established rivals in the Blue Suns, but make up for this with cutting edge equipment and weaponry, as well as their extensive use of biotics. Eclipse also has many ventures that delve into smuggling; they control nearly 20% of all smuggling on Omega, and specialize in transporting illicit goods and criminals from place to place.

Prospective Eclipse operatives, at least on Illium, are rumored to be required to successfully commit a murder before they can be given their uniform.

Eclipse is primarily made up of asari, salarians, and humans. YMIR, FENRIS, and LOKI Mechs are also utilized. 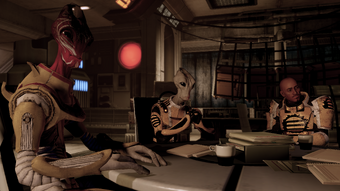 In 2185, the Eclipse commander on Omega, Jaroth, is seeking revenge on the vigilante Archangel for killing his brother and disrupting his operations. Due to Archangel's persistent harassment of Eclipse and rival merc groups, in an unprecedented act, Eclipse, Blood Pack, and Blue Suns all temporarily team up to go after and end Archangel once and for all.

Commander Shepard thwarts that operation by helping Archangel defeat all three organizations. Jaroth, his mechs, and his men do not survive the encounter.

Nassana Dantius employs Eclipse mercenaries on Illium to protect her from the drell assassin, Thane Krios. Shepard must fight through numerous Eclipse troopers in an effort to locate the assassin. In one scene, Shepard confronts a lone Eclipse trooper and interrogates him. Shepard has the option to extract information non-violently or lose patience and defenestrate him.

While trying to recruit Samara on Illium, Shepard is tasked with finding the name of the ship that transported Morinth off world from an elite group of Eclipse mercenaries known as "the Sisterhood." They primarily recruit young asari, who as part of their initiation into the group must perform one murder. Eclipse troops are also hired by Niket to transport Oriana, and form the majority of the opposition Shepard's team faces. At least one member of this team is a Vanguard. 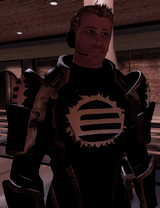 On Bekenstein, Eclipse provides security for Donovan Hock. Some of the guards assigned to Hock's estate wear uniforms with an alternate color scheme (black armor with a white logo) to differentiate themselves from the standard troops. Chief Roe is in charge of the contingent around Hock.

Several members of this unit are killed by Shepard and Kasumi Goto.

Encrypted data possibly about Cerberus involvement in rachni experiments has been acquired by Eclipse. To decrypt it without wasting years in the effort, the mercenaries captured operative Tyrone Rawlings and held him on a small base in Lorek for interrogation. The operative has managed to broadcast a distress signal that would be passed to Commander Shepard's team.

If a rescue/retrieval operation is launched, Shepard discovers that Rawlings did not survive interrogation. The data held by Eclipse can be sent either to Cerberus or the Alliance, or hoarded by Shepard for future use.

Eclipse, Blood Pack, and Blue Suns had been planning to overthrow Aria T'Loak once Archangel has been dealt with. Jaroth has managed to bring over the Blood Pack to the conspiracy and has messaged the Blue Suns leader Tarak about it. If Shepard retrieved the datapad containing the message and presented it to Aria, part of her reprisal against Eclipse is rewarding Shepard with coordinates to one of the mercs' smuggling depots on Daratar. The Commander can independently discover this depot, however, while traversing the galaxy.

The depot is guarded by YMIR mechs programmed to destroy its contents before it falls into enemy hands.

An Eldfell-Ashland Energy facility on Helyme has been attacked by Eclipse soldiers looking for information about the Ter Alan, a ship containing valuable cargo that recently docked in the facility. The mercs are led by the salarian Captain Vorleon.

If Shepard intervenes in this event, the mercs are purged from the facility. The Ter Alan is later stated to be found crashed in the Dranek system, with no reported survivors.

During the Reaper Invasion, Aria is attempting to unite the Eclipse, Blood Pack, and Blue Suns under her leadership since they're running amok away from Omega. Aria bargains with Shepard that the Commander will have the mercenaries' support against the Reapers if Shepard helps her assume control over them.

Shepard can choose to assist by either persuading Commander Bailey to release Jona Sederis from imprisonment, or by persuading Sayn to assume leadership of Eclipse. The payoff is "a ton of mechs" and "elite troopers for stealth operations" in Aria's words.