This idyllic agrarian world was one of the first human colonies established beyond the Charon mass relay. Eden Prime's biosphere is unusually well-suited for importation of Earth-native life. This fertility drew heavy immigration and development by the Systems Alliance and various corporations.

Today Eden Prime is a model of sustainable, organized development. The population is housed space-efficient arcologies that tower over thousands of kilometers of green fields and orchards.

This idyllic agrarian world was one of the first human colonies established beyond the Charon mass relay. Eden Prime's fertile biosphere drew heavy immigration from the Systems Alliance and other human organizations.

In 2183, Eden Prime was attacked by a geth force led by the rogue Spectre Saren Arterius. Commander Shepard, responding to the attack, encountered a Prothean beacon that warned of imminent Reaper invasion. It is thanks to this beacon, and the Commander's quick action, that the galaxy has any chance of survival today.

Although the Reapers rushed past much of the Exodus Cluster in their plan to take Earth, it is clear the war has come to Eden Prime. Distress signals have jammed all available frequencies, fires burn in vast swaths across the arable land, and its once-extensive monorail system is twisted metal. Cerberus has much to lose if word of their ruthless attack on the human colony gets out. What they stand to gain must be equally valuable. 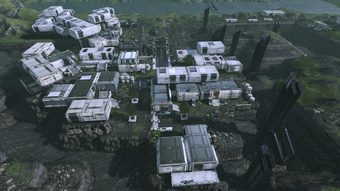 Eden Prime is a human colony founded close to the Inner Council Space borders. Known for its pristine, Earth-like greenery and suitability for sustaining life, it has become a kind of symbol for humanity's ability to create functioning colonies in an interstellar community. Eden Prime is known for being a beautiful paradise for all species. Most long time colonists are in the agriculture business.

While estimates on Eden Prime's population put a figure of around 3.7 million in 2183, data collected by the Collectors and retrieved by Aria T'Loak a week before the SSV Normandy's destruction has a tally of 3,962,450 humans.

In 2185, the planet is named a "culturally significant site" by Earth's Council for the Preservation of Human History and Culture. Since the geth attack two years earlier, however, according to Zaeed Massani only the farms on Eden Prime have been rebuilt.

50,000 years before the present era, Eden Prime was a Prothean colony. It was overrun by Reaper forces: Reaper Destroyers and Sovereign-class vessels descended upon the planet and leveled its cities, supported by legions of Collector troops.

One bunker complex on the planet was supposed to sustain a million Protheans in stasis pods but indoctrinated traitors divulged its existence. A series of disasters brought on by desperation extensively damaged the bunker and reduced the survivors to mere hundreds. By 2186, only one surviving stasis pod was unearthed from the complex, and it has attracted the notice of Cerberus.

The rogue human organization has taken to abducting the colony's able-bodied men and women while researching how to open the pod. A local resistance movement formed to thwart Cerberus objectives, and how successful they are depends on the level of intel they receive.

Known flora native to Eden Prime include lace-in-lilac. Seeds from this plant have been transported 2.5 million lightyears away by Milky Way colonists to the Andromeda galaxy in the hope of starting a garden there someday.