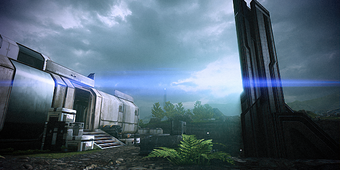 The colonists of Eden Prime are fighting the Cerberus occupation. Help the resistance movement by getting them Cerberus intel.

This mission is acquired by accessing a terminal in the right building when you land on Eden Prime as part of the Priority: Eden Prime mission. Liara mentions that if the resistance got a hold of the intel, it can do them a lot of good.

Heading down the hill from the drop off point, you go underneath an overhang between two buildings with girder supports on either side. There is a doorway to Building 6 on the right hand side. Go through this and head all the way to the end of the building. On the left is an L shaped desk and the first piece of intel is on that computer. The building is directly behind you when you approach the computer which raised the lift with the Prothean Artifact on it.

After raising the artifact head towards the main complex of buildings. Go into the first building (building 5) on the left hand side. Head to the end of the building and go through the doorway to the right, into the next room. On the left hand side is the terminal with the second piece of intel.

In front of you from the doorway you came in through, you can see you're on the second story. In front of you is a building with the number 2 on the side with a ladder heading up to the roof. Go through the door of that building turn right and head down the length of the building. Go past a body of a trooper on the floor and stop before you come to the closed door. The terminal you are after is on your left on the center console of three.

If you manage to get all three pieces of intel, you will get an email saying that the resistance pushed Cerberus off Eden Prime. If you do not, then the mission remains uncompleted in Shepard's journal and additional updates to Eden Prime Support War Asset unattainable as you can never return to Eden Prime once you open the Prothean Artifact.

Retrieved from "https://masseffect.fandom.com/wiki/Eden_Prime:_Resistance_Movement?oldid=517421"
Community content is available under CC-BY-SA unless otherwise noted.