Agebinium
Elanos Haliat is a pirate and prominent figure in the Terminus Systems. Haliat was once the most powerful leader of the Terminus pirate bands, and planned a huge assault on the Alliance to increase his prestige. With the support of batarian funding, Haliat rallied the inhabitants of the Terminus Systems and attacked Elysium, an assault later known as the Skyllian Blitz.

Haliat's plans came to nothing as the Alliance repelled the Blitz and decimated the pirate ships from orbit. The Terminus pirates blamed Haliat for the Blitz's failure, and he lost his position as their leader. He retreated to a remote world in disgrace.

Haliat saw a chance to regain his prestige when he found an Alliance espionage probe left over from the First Contact War. These probes carried heavy nuclear payloads; he knew the Alliance would send someone to recover it, so he used the probe as bait. Haliat activated the probe's homing beacon and hid it in a mine on Agebinium.

Just as Haliat had hoped, the Alliance sends Commander Shepard to retrieve the probe. Wanting the prestige of killing the first human Spectre, he waits until Shepard is inside the mine, then detonates a seismic charge to trap Shepard's team inside. Haliat then appears over a hologram to taunt Shepard - or to blame Shepard for Haliat's disgrace if the Commander is a War Hero - and activates the probe's nuclear payload with a ten-second countdown.

Haliat steals Shepard's Mako and brings it to his camp, only to be surprised by Shepard's team, who had deactivated the nuke and escaped the mine. Haliat and his followers attempt to kill them, though all of pirates die in the ensuing firefight. 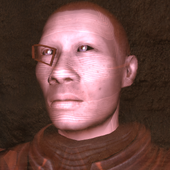 Retrieved from "https://masseffect.fandom.com/wiki/Elanos_Haliat?oldid=514695"
Community content is available under CC-BY-SA unless otherwise noted.