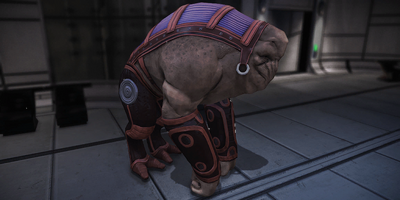 The elcor are a Citadel species native to the high-gravity world Dekuuna. They are massive creatures, standing on four muscular legs for increased stability. Elcor move slowly, an evolved response to an environment where a fall can be lethal. This has colored their psychology, making them deliberate and conservative.

Elcor evolved on a high-gravity world, making them slow, but incredibly strong. Their large, heavy bodies are incapable of moving quickly, but they possess a rather imposing stature and immense strength, as well as thick, tough skin. They move using all four limbs to support and balance their massive bodies. Given their method of communication, they have highly-attuned olfactory senses. They also have at least three stomachs.

Elcor "lips" are multiple vertical slats situated in what is normally the location of the mouth in other races. Despite the peculiar arrangement, these "lips" are capable of holding on to protruding objects like cigars with no effort.

Elcor speech is heard by most species as a flat, ponderous monotone. Among themselves, scent, extremely slight body movements, and subvocalized infrasound convey shades of meaning that make a human smile seem as subtle as a fireworks display. Since their subtlety can lead to misunderstandings with other species, the elcor prefix all their dialog with non-elcor with an emotive statement to clarify their tone.

The elephantine creatures can live for centuries although not to the same extent as asari or krogan. A hundred or so years is considered young by elcor standards while four hundred years give or take is considered old and grandfatherly. The young of an elcor is called a calf. 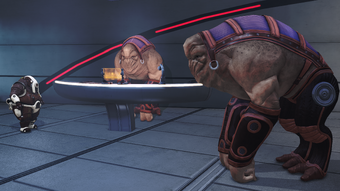 Prehistoric elcor traveled across Dekuuna in large tribal groups. These groups were likely led by the oldest and most experienced elcor. This may have later developed into the elcor culture of Elders, whose wisdom could keep the tribe safe provided they followed the correct guidance.

According to their ambassador, the elcor were just making their first forays into space travel when the asari made contact with them. With their help, the elcor discovered the closest mass relay and, within a single lifetime, had established a regular trade route to the Citadel. The elcor quickly became one of the more prominent species in Citadel space, though they still have to share an embassy with the volus.

During the Reaper invasion of 2186, the elcor prepared a defense on their homeworld of Dekuuna. Their navy, however, was decimated upon the Reapers' assault on their system, leaving many elcor warriors and civilians trapped on Dekuuna. Reapers took longer than usual to pacify their homeworld due to the elcor tendency of living in numerous scattered settlements as opposed to crowded population centers, though this was not enough. Rescue efforts from other races aren't coming, as one elcor diplomat onboard the Citadel laments, forcing him to beg Commander Shepard for assistance.

Some elcor survivors manage to get off the planet if Shepard chooses to help, although the elcor diplomat in charge doesn't even bother with prefixing his statement to clarify what he feels at the numbers: "Not enough." Nevertheless, remnants of the elcor military continue to fight alongside the rest of the galaxy until the final battle on Earth.

The quarian ark Keelah Si'yah leaves for Andromeda just as the Reaper invasion begins in the Milky Way, carrying with it exactly 3,311 elcor ready to start anew in another galaxy. 30 years prior to arrival, several elcor are disgorged from their huge cryo-garages, and some of them contract the highly virulent Fortinbras Plague sweeping throughout the ship.

Thanks to the efforts of a doctor named Yorrik, a cure is distributed to all 6 races aboard the vessel although not before several casualties occur.

Elcor usually prefer to stay on their colonies rather than travel in space, which may be why few elcor are seen on the Citadel or on other worlds. Possibly because of their size or evolution in the open air, the elcor find the necessary confines of space travel uncomfortable, and many modern elcor indeed prefer the open sky to the former. Evolving in a high-gravity environment where a fall could be lethal has made elcor psychology deeply cautious and conservative. Their culture is built on small, tight-knit groups, and their conservative nature means the elcor government is extremely stable. Despite this, they are always welcoming to outsiders.

Elcor are traditionally migratory in nature. This reflects on their choice of twin capitals on their homeworld, one for the wet season and one for the dry season. Modern technology has rendered the tradition obsolete, though elcor still observe it. 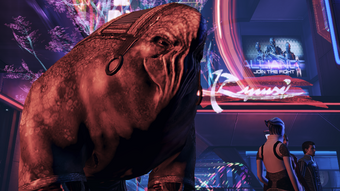 Like other sapient races, elcor are no strangers to entertainment and the arts. Artists like Forta are reputed to have made works that can make viewers go mad if stared at for too long. Other members of the race made forays into acting, with two ending up in a Blasto movie. Several elcor actors have been cast in an all-elcor rendition of William Shakespeare's Hamlet, where their particular species traits are used in conveying the nuances of the play. The production turned out to be an award-winning 14-hour hit by 2185 and ran until 2186.

Elcor cultural artifacts fascinate people enough to warrant archiving objects related to the topic. One such artifact, an elcor mating-totem, is filed away in vault 347B of the Citadel Archives. Another artifact, the Code of the Ancients, contains the collected wisdom of the elcor people and their ancestors. It is revered by many for the guidance it provides, and is sequestered away on their homeworld. 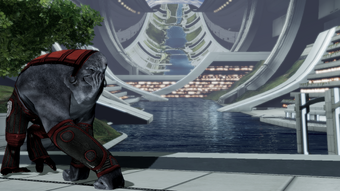 Despite the general tendency for stability and the benign, elcor do have outliers among their people. Psychopathic tendencies can crop up from time to time; Garrus mentions an elcor serial killer prowling the Citadel during his time as a C-Sec officer. Some elcor even live on Omega, earning their keep as bouncers to established clubs or merchants in their own right.

The elcor have a mnemonic saying for virus detection – "Happy Turians Treat Raloi and Rachni to Dinner", or hydroxypyrene, trisulfonic acid, thionin acetate, rhodamine, ruthenium dichloride, and Drell Belly Green #15 dye – which was considered common knowledge among elcor at least 3 generations earlier. This suggests that the elcor have known about the raloi for far longer than their official discovery in only 2184 CE.

The elcor economy is small, only slightly larger than the Alliance's, but extremely well developed. They see no point to rushing things, and are fond of making thorough, century-long development plans. They don't need to trade for any resource—they have all they require to supply their own needs, and trade only in finished goods. Any attempt to embargo their space would be fruitless.

The elcor government is known as the Courts of Dekuuna. The elcor follow the recommendations of their Elders, who spend years poring over ancient records of jurisprudence to determine the precedent that should be followed in any given situation. The Elders record closely argued and minutely detailed instructions on what course to follow in any theoretical crisis. These are filed away in huge libraries of data discs and are consulted when needed. This makes elcor policies very predictable, provided one has done a great deal of research.

Because of their slow, conservative psyches, elcor are not suitable for making the spur-of-the-moment decisions necessary in combat situations. Instead, they rely on sophisticated VI combat systems. These war machines can choose between thousands of gambits developed and polished over centuries by elcor strategists.

The slow speed and immense size of the elcor makes them easy targets. Fortunately, their durable hide allows them to shrug off most incoming fire. Elcor warriors don't carry small arms; their broad shoulders serve as a stable platform for the same size of weapons typically mounted on Alliance fighting vehicles. According to an elcor diplomat on the Citadel, elcor soldiers are called "living tanks" by their enemies, among other less flattering names.

The elcor do not maintain a large fleet of military starships. This seems to be due to a combination of their conservative nature preventing hasty rushes to war, and their relatively-isolated and self-sufficient economy that would never encounter a trade dispute serious enough to threaten war over. They do have several cruisers and carriers at their disposal, though their real value is in troop transport.