Emily Wong is an investigative journalist working on the Citadel. When she is researching for a big story, she may sometimes ask for Commander Shepard's help due to her lack of authorization to access certain areas.

While Shepard's hunting for incriminating evidence against Saren Arterius, Emily is investigating corruption and organized crime. At the Upper Wards near the stairs leading to Flux, she can flag Shepard's attention and ask to share with her any information uncovered. She only knows Shepard's investigating something big, and she taps the Commander's psychological profile in order to plead her case. She has other potential sources of information, though she figures she has a better shot with Shepard, and she's willing to provide proper compensation for the effort.

Shepard can provide her with an OSD from Fist's office if it was recovered, on which all of his files are stored.

Emily's next assignment is an investigation into the working conditions of traffic controllers on the Citadel. Provided she wasn't blown off earlier, she asks the Commander for help again, to plant a bug in the traffic control tower above C-Sec. Shepard can either help her study the working conditions so she can break the story, or refuse to plant the bug. She is waiting at the Citadel Tower.

While riding the elevators in the Citadel, a news report may be heard about Emily's "crime syndicate" exposé, compiled with the Commander's help. If Shepard did as Emily asked on the second assignment, the traffic controller story will also be mentioned. If Shepard refuses to plant the bug, it will instead take the form of an announcement for an interview. 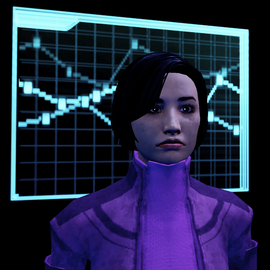 Emily can be seen in 2185 as a newscaster via holographic video terminals on the Citadel. According to news reports, she works for the Future Content Corporation news service.

If Shepard assisted her two years prior, she will send the Commander an interview request. The following message reaches Shepard's email after visiting the Citadel for the first time:

In 2186, Emily Wong reports for FCC News and the Alliance News Network from Earth on the Sol system's mysterious comm buoy outage. She is able to establish limited off-world communications through short text-only messages sent via a Quantum Entanglement Communicator. While reporting, she witnesses a Reaper descending through Earth's atmosphere into airspace over Los Angeles.

She eventually arrives at El Monte Airport, where she meets some members of the National Guard who are attempting to hold off the Reapers with anti-aircraft guns. The National Guard and their air support lead a counter-attack which is ultimately ineffective.

Wong realizes that the signal she is broadcasting led the Reaper forces to that location. In an attempt to escape in a sky van, Wong is shot at and injured as the Alliance forces and airport are destroyed. Bleeding badly and without any other weapons to use, she steers her sky van toward an approaching Reaper at ramming speed. Her signal is subsequently lost, and she is presumed dead.

Retrieved from "https://masseffect.fandom.com/wiki/Emily_Wong?oldid=529072"
Community content is available under CC-BY-SA unless otherwise noted.