Mass Effect 2
Mass Effect 3
Ereba is an asari merchant on Illium. She runs the store, Memories of Illium, that sells model starships and fish. She is currently the focus of the love-struck krogan Charr who stands nearby reciting poetry.

Ereba was in a relationship with Charr but broke it off with him because she was not sure of what she wanted. She thinks that Charr may only be interested in her so that he can have children (Ereba notes that krogan whose reproduction has been adversely affected by the genophage may only procreate with asari). Commander Shepard can either persuade her to take back Charr or to forget about him. Regardless of the outcome, Ereba will give Shepard a discount at her store.

If Shepard helps get the couple back together, they travel to Tuchanka together to start a new life. Ereba expresses her doubts and hesitation at the ramshackle state of Tuchanka and the xenophobic attitudes of the other krogan. She then desires to leave. Charr is able to convince Ereba to stay by saying that the dilapidated appearance of Tuchanka builds character and that she doesn't have to worry about the other krogan as she is under Charr's protection. 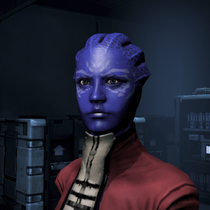 By 2186, Ereba is on the Citadel in the Presidium Commons as a merchant for Nos Astra Sporting Goods. If Shepard persuaded Ereba to continue her relationship with Charr in 2185, she mentions to an asari customer that Charr, now her husband, is off fighting in the war against the Reapers. Should the Commander go after a missing krogan team, Shepard can find a dying message from Charr, consisting mostly of more poetry - with poetic references to an unborn child. He asks for it to be brought to Ereba on the Citadel. Ereba is shaken and excuses herself after the message's playback.

If the Commander convinced Ereba to break off with Charr on Illium, or if Shepard never bothered with their relationship blues, Ereba can be overheard in the gift shop chatting with her customer about the war on Palaven instead. Charr still leaves a dying message to be delivered to her though, and Shepard can either comply or leave her be. Ereba is still rattled with Charr's message if Shepard delivers it.

Retrieved from "https://masseffect.fandom.com/wiki/Ereba?oldid=516666"
Community content is available under CC-BY-SA unless otherwise noted.