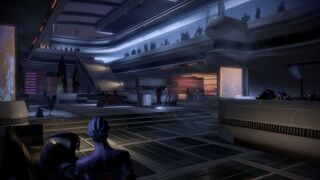 Eternity is a lounge/bar/hotel near the Nos Astra exchange on Illium.

The area is dimly lit with red light and is tended by the bartender, an asari matriarch named Aethyta. Upon entering the area, Conrad Verner can be seen having a conversation with the bartender (See the assignment Illium: Conrad Verner). There is also a terminal for the Illium: Liara: The Observer assignment nearby.

The lounge seems to be roughly divided into two separate sections:

Other than when Shepard and company come here to meet Lanteia for Miranda's loyalty mission, the room seems to remain empty. In the room there is a couch and a table and, other than a large window with the Eternity logo on it, there are really no other notable features of the room.

Retrieved from "https://masseffect.fandom.com/wiki/Eternity?oldid=436106"
Community content is available under CC-BY-SA unless otherwise noted.