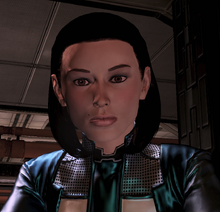 Eva Coré is a doctor and recent addition to the science team studying the Prothean Archive on Mars.

Eva Coré arrives at the Mars facility one week prior to the Reaper invasion of Earth. After fleeing Earth, Commander Shepard is ordered by Admiral Hackett to head to Mars to retrieve intel from Liara T'Soni and the team studying the Prothean Archives before humanity loses control of the Sol system.

Shepard and crew discover upon landing that Cerberus had arrived and commandeered the site. Considering it would have taken nothing less than a battalion to take the facility, both team members and Liara conclude that a mole must have been involved. After fighting their way through the facility and reaching a security terminal, the team discovers that Dr. Eva is the suspected Cerberus infiltrator who enabled the disposal of the Mars research team. She takes charge of the Cerberus ground troops on-site and begins to download and erase the Prothean data in the archives.

Ashley/Kaidan soon discover Eva in a terminal booth inside the archives, amid a projection of Crucible schematics. The woman disables her Alliance adversary with a kick before destroying the console linked to the Prothean cache. She leads the team on a chase through the station, and manages to secure a ride on a Cerberus shuttle. James Vega, who had been ordered back to the squad's own shuttle by Shepard after meeting up with Liara, prevents her escape by crashing the Normandy's shuttle into hers. As the team begins to pick themselves up from the aftermath, with Ashley/Kaidan picking up Liara, Coré emerges from the inferno of the shuttle crash, revealing that she is not human, but a gynoid infiltration unit controlled by the Illusive Man.

Ashley/Kaidan attempts to take care of the unit, but ends up being grabbed by the helmet. Eva attempts to kill them after contacting the Illusive Man for orders, resulting in critical injuries for the Virmire survivor. After incapacitating the squadmate, the unit turns on Shepard, who pulls out a pistol and takes down the drone.

If Shepard does not shoot down Eva before she reaches them, Shepard will be knocked to the ground. Before they can counter-attack, Eva will generate an omni-blade and stab Shepard in the face, resulting in an instant fatality. As an alternate instant fatality, she will jump on Shepard's face with both her feet, crushing it.

During the chase, Eva may use Incinerate to slow the player down. She also possesses a Shuriken SMG and will stop to fire from cover several times during the chase, resuming flight when the player has returned fire or has gotten too close.

Eva is fast and agile. Her shields rapidly regenerate, preventing any health damage from being inflicted by the player until the confrontation at the end of the chase. Even if the player somehow depletes all of Eva's shields, she will simply use Shield Boost to instantly regenerate them, making even so much as one hit on her health bar nearly impossible. 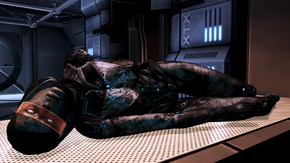 On Shepard's orders, Vega shoulders Eva's charred body and takes it back with them to the Normandy, where it's deposited in the AI Core room on Deck Three for study.

The Normandy starts malfunctioning soon after, sometime during the mission to retrieve the turian primarch from Menae. EDI walks out of the AI Core wearing Eva Coré's renovated body after the mission, explaining to Shepard what transpired. EDI was in the process of analyzing the unit for data on the Prothean device when she accidentally triggered a backup power source and CPU. Eva violently resisted EDI, and the whole process of subduing Eva was the cause of the ship-wide fluctuations as well as a fire in the AI Core.

While browsing video files in the Cerberus base, Shepard discovers that Eva was made to be a successor to EDI, but rather than being able to think for herself, Eva would be designed to be intensely loyal to Cerberus.

Retrieved from "https://masseffect.fandom.com/wiki/Eva_Cor%C3%A9_(Mass_Effect_3)?oldid=455107"
Community content is available under CC-BY-SA unless otherwise noted.