View source
watch 02:46
The Quarry - The Loop
Do you like this video?
Play Sound
“In the darkest hour, there is always a way out.”

Eve, as named by Mordin Solus or Padok Wiks, also known as Urdnot Bakara, is a female krogan shaman. Eve is the only survivor of Maelon's experiments on Tuchanka in 2185 to cure the genophage. She, along with a number of other female krogan, were recovered by the salarian Special Tasks Group after it was shut down and transferred to Sur'Kesh.

Her birth name is Urdnot Bakara, but she surrendered it when she became shaman of the female clan. Bakara was locked in a cave for a week with just enough food to last. She was in complete darkness with none other than her own heartbeats to sustain her, and she had to prove her resolve by clawing her way out in time. Although she started to dig the wrong way, a crystal shard which she found helped her dig her way to freedom.

Never having revealed her true name to any outsider, Mordin/Padok names her "Eve" after she is transferred to the Normandy SR-2, saying human mythology seemed appropriate as they are on a human ship. 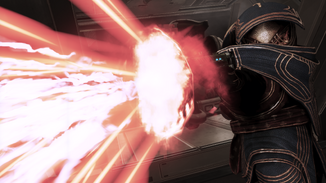 Primarch Victus calls a war summit of all Council races to decide on a course for the war against the Reapers. The krogan are also invited, however they refuse to secure an alliance with the turians unless a cure for the genophage is found and released.

During the summit meeting aboard the Normandy, the krogan Urdnot leader brings to light a salarian conspiracy which captured all the surviving female krogan from Maelon's experiments on Tuchanka and brought them to Sur'Kesh as prisoners and test subjects for further study. The krogan leader claims they are immune to the genophage and is adamant against supporting the turians unless the females are released. Commander Shepard and Primarch Victus manage to convince Dalatrass Linron to release the female krogan, with the Commander overseeing the transfer.

After arriving at the STG base, Shepard's squad finds that Bakara is the only survivor as all the others died as a result of complications from Maelon's experiments. The base then comes under attack by Cerberus, who was tipped off to the transfer. Battling through Cerberus forces, the squad successfully guides Eve's pod to safety. Just as she is released from her pod, a pair of troopers arrived in a last-ditch effort to eliminate her. She grabs the Urdnot leader's shotgun and kills both troopers before they can react, saying "I can handle myself" to Wrex if he is the Urdnot's leader; if Wreav is the leader, she says "I'm not your property Wreav".

Once aboard the Normandy, she is taken to the Medical Bay for tests while the cure is synthesized. Shepard is free to talk to her anytime during her stay. Her constitution at this time already foreshadows what fate has in store for her in the future: she either coughs when she speaks, or she doesn't. Either way, her salarian doctor advises that she recover her strength first before setting off the next leg of the genophage cure on Tuchanka.

Although she refuses to divulge her real name, she provides some interesting commentary about female krogan, Tuchanka's past and hope for its future. She presents the crystal shard that became her salvation to the Commander, saying that "in the darkest hour, there is always a way out." She also develops a friendship with her salarian doctor, who helped her immeasurably during her stay on Sur'Kesh and is helping her through the genophage cure process.

If Mordin is her doctor, she occasionally badgers the salarian into singing for her, and grumpily asserts that Mordin's habit of vocalizing thoughts is distressing to hear. Mordin tries toning it down, but Eve says the result is worse. Mordin also tries setting her up with Garrus, but she's just not interested.

If Padok Wiks is her doctor, the salarian tries guessing her real name, which devolves into a discussion on how krogan actually get their birth names. Eve relates that male krogan just hold belching contests and whatever happens to sound like a word becomes a name. Wiks wonders if the Urdnot leader's name was a belch, and Eve reminds him not to ask.

If Wrex is Urdnot clan chief, Eve informs Shepard that when he's not trying to sire half of Tuchanka, he's the best thing that ever happened to the krogan, but she'd never tell him that. She describes him as a mutant, who's not obsessed with war like many male krogan, which she permits Shepard to pass onto him.

If Wreav is the clan leader, Shepard tells her that Wreav wants vengeance against the salarians and turians once the genophage has been cured. Eve counters this by saying that Wreav would need a sizable army to take on the Citadel races, and that she and other female krogan would make sure Wreav would end up with a civil war on his hands.

If Shepard is male, then Eve will say that she has only met a few humans in her time, and that she is glad for the opportunity to speak with him. If the Commander is female, then she says that she is glad that humans treat their women with respect, as they have placed a large responsibility on her. She then suggests that the two of them "show the men how it's done", to which Shepard agrees. 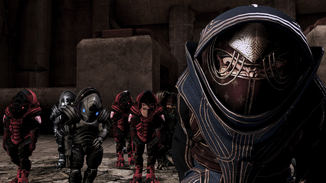 Eventually, the salarian doctor declares Eve ready for travel to Tuchanka. After the genophage cure is prepared, Shepard arrives on Tuchanka and the krogan prepare to use the Shroud to spread the cure. A confrontation ensues at the Hollows, the sacred burial ground of the krogan, when some of the krogan clans became hostile on seeing a salarian involved in the operation. The potential fight is averted when Eve delivers a speech that they must put aside their differences and fight together against the Reapers.

In a joint operation with the turians to attack a Destroyer guarding the Shroud, the krogan led by Clan Urdnot leave the camp in Tomkahs. However, the operation goes wrong as the krogan get off to a late start, and the turians end up with a solitary airstrike where they are outmatched.

The convoy then comes under attack and Shepard orders them to move out and leave the squad behind. After Shepard manages to fight through the ruins and back to the convoy, Eve proposes an idea to eliminate the Reaper. She mentions that the Shroud is near the two largest Maw Hammers in existence, and they can summon Kalros, "The Mother of all Thresher Maws". Eve says that Tuchanka is as much her home as it is the krogans', so if the hammers are activated, then she will come. While the maw has the Reaper distracted, the salarian scientist can finish the cure.

As Shepard sets off, Eve heads into a nearby lab with her salarian doctor to finish the cure. If the Commander saved Maelon's data, then Eve survives the procedure to cure the genophage, and Shepard later gains strong support from the krogan clans.

At the conclusion of the mission, Eve finally reveals her birth name to the Commander and says that they will always be friends. She later sends a message to Shepard, informing the Commander of the various krogan clans gathering in the Kelphic Valley, to whom she promises to speak to ensure that genophage cure isn't taken for granted. 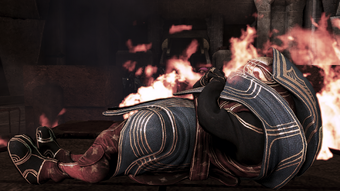 If Shepard chose to destroy Maelon's data back in 2185, however, Eve dies due to complications from having incomplete data, regardless of whether Shepard sabotaged the genophage cure or not. This causes several krogan clans to fall into conflict over who was responsible for Eve's death, weakening them as a whole. The krogan hold a funeral for her, attended by many krogan, the Urdnot leader, as well as Shepard. Her body is brought to the center of the Hollows, incinerated in a funeral pyre. Eve's eulogy is given by the current Urdnot shaman.

Even if the genophage is dealt with, Eve may still die later, if Shepard does not aid Lieutenant Victus in disarming a rearmed turian bomb left over from the Krogan Rebellions. Eve was rallying the clans in the Kelphic Valley when the bomb explodes, obliterating her and the krogan population present. Shepard shortly receives a message from the Urdnot leader stating she died.

If Eve survives to rally the krogan clans, she will send Commander Shepard a message.

After retaking the Normandy, Shepard can meet with Wrex at the Silver Coast Casino bar, where he reveals he is being hounded by every female on Tuchanka now that the genophage has been cured. He states that Eve has been no help at all, and in fact encourages it. 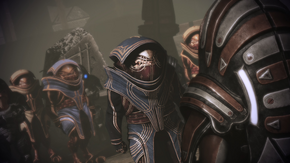 Later, if Wrex is alive, he relates to Shepard during the final assault on Earth that Eve is pregnant with their kids. If Mordin sacrificed himself to cure the genophage, she insists on naming their firstborn in his honor. If Wreav is the krogan leader, he complains about how Eve is trying to put a leash on him.

If Shepard activates the Crucible, Eve alive or dead plays a major part in what follows after Shepard's sacrifice. If the cure was real and Wrex is the krogan leader, or alternately, Shepard merges organic and synthetic life regardless of who's the leader and whether the cure is real or sabotaged, Eve can be seen handing off a krogan baby to one of its parents. If she died, a stand-in for her will be seen cradling the infant.

If Wreav was the leader and the synthesis option wasn't taken, however, Eve refuses to cooperate with the brute's plans for galactic domination, leading to a standoff between Wreav's faction and her females.