Evfra de Tershaav is the enigmatic leader of the Angaran Resistance. Stern and gruff and disdainful of outsiders offering to help, he's nonetheless prudent enough to listen to advice but highly suspicious of any underlying motives.

Evfra joined the Resistance with the aim of shaping it into the effective fighting force it aspired to be due to its failure to protect his family from the kett. He first gained notice when he led a raid into a kett slave labor camp that saw the liberation of hundreds of angara and the annihilation of an entire battalion sent to stop the raid.

Four years before the arrival of the Nexus into Andromeda, Evfra managed to unite the disparate resistance movements under his own leadership.

Pathfinder Ryder first meets Evfra on the planet Aya in search of its Remnant vault. Evfra tells the human that only Moshae Sjefa knows the vault's location but she had been captured by the kett and the Resistance has failed to rescue her. At first Evra is very distrustful of Ryder; however, Jaal Ama Darav volunteers to be his observer on the Tempest. He accepts Jaal's request to keep an eye on Ryder and join them on the Tempest because he trusts Jaal can handle himself should Ryder try to kill him.

After Ryder's completion of missions on Havarl and/or Voeld, Evfra still refuses to trust the Pathfinder, believing the human's motives to be self-serving. During a holoconference with Ryder and Jaal aboard the Tempest, Evfra reports that the Moshae is being held in a virtually impenetrable kett facility on Voeld. Ryder volunteers their aid, either because they have "Initiative scientists" that can help or an artificial intelligence. If they truthfully reason they have SAM, Evfra realizes the implications and acknowledges Ryder's honesty as marking them different from the kett. Either way, Evfra is convinced, leading to a joint operation between the Pathfinder and the Resistance that rescues the Moshae. 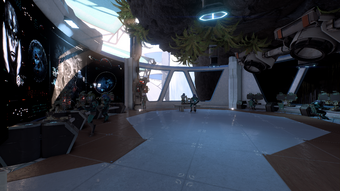 Upon the Moshae's return to Aya, Evfra tells Jaal to report for reassignment, only for the latter to request to remain on the Tempest. Whichever way the conversation goes, Evfra sees the point of the continued presence of a Resistance asset in the Tempest.

After the Moshae's meeting with Ryder in Aya's vault, Evfra becomes the target of her anger, as it is revealed to Ryder that he knew that a Resistance commander, Vehn Terev, had betrayed her to the kett and kept it secret, fearing it would undermine faith in the Resistance.

Terev is on Kadara. With Kadara currently a haven for Nexus exiles and angaran deserters and scavengers, Ryder volunteers to go there, question Terev on the location of the Archon's ship, and extract him. Once the Tempest lands at Kadara Port, Evfra tells the Pathfinder to meet his contact, Shena.

If Ryder helps Terev escape Kadara, Evfra wants to place Terev in a cell devoid of sunlight, but the Moshae convinces him to commute the sentence to tending Aya's Memorial Gardens.

Evfra later leads the Resistance to aid Ryder in the battle for Meridian. In the aftermath, Evfra would approve if Ryder selects the Moshae as Heleus' ambassador to the Nexus, but would disapprove if any other candidates are chosen. Though the Archon is gone, Evfra believes the war didn't die with him as the kett are still out there.

Evfra receives a report about Ryder's handling of scavengers who were stealing angaran satellites. He tells them good work the next time they swing by his office.

If Ryder stopped the Charlatan from killing Sloane Kelly and later speaks with Evfra on Aya, he asks the Pathfinder if they could check in on his Kadara contact. If Ryder fills him in on Reyes' failed grab at power, Evfra is initially angered for not being told sooner, then sighs in resignation that Sloane is becoming a real problem. If Ryder just promises to look for Shena, Evfra fumes his contact better have a good reason for the radio silence or he's fired.

On the other hand, if Ryder allowed Reyes to assassinate the Outcast leader, Evfra expresses something close to gratitude, stating that it's good Kadara Port is now under angaran rule once again.

Evfa has read the aftermath report of Jaal's final showdown with Akksul. If Jaal was shot, Evfra incredulously reacts to Ryder's seeming inaction and demands what they would have done if his best soldier ended up dead. If Ryder assures him Akksul would've been next, Evfra muses it was lucky it didn't come to that. If Ryder declares their trust in Jaal's plan, Evfra still thinks it was a big risk.