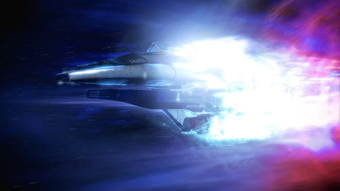 FTL, an abbreviation of faster-than-light, is a method of traveling faster than the speed of light which does not involve the use of mass relays. Once a vessel makes a jump via a mass relay, conventional FTL can be used to move around the space surrounding it at reasonable speed.

FTL drives are devices which allow ships to travel at FTL speeds through space. FTL drive cores work by exposing element zero to electric currents, creating mass effect fields. It reduces the mass of an object, such as a starship, to a point where velocities faster than the speed of light are possible. With a mass effect drive, roughly a dozen light-years can be traversed in the course of a day's cruise without bending space-time and causing time dilation.

The FTL drive of a ship refuses to fire if a significant object is in the path of a planned jump. Removing this safety mechanism is nigh impossible because it is inherent to the FTL warm-up process. Cynical intelligence analysts note that the safety system was attributed to the Protheans whose technology was attributed to the mass relays. However, one method to bypass the safety mechanism is to install an improvised FTL plotter with an archaic design no longer used in Citadel space, as has been demonstrated in the Vallum Blast on Taetrus. The skillset required for bypassing the safety features is noted to be like finding a particle physicist who can also build a train.

The precise maximum speed and the time this acceleration can be maintained varies depending on the exact type of FTL drive being used. In general, the larger the drive, the longer the ship can run at FTL.

When travelling across space, thrusters are applied in one direction for the first half of the trip, then the thrusters are reversed for the second half of the trip in order to reach appropriate speeds for arriving. In 2185, Commander Shepard can have a conversation with Marab on this particular point stating that several people who travel in space forget that the ship must be slowed as much as it was accelerated, hence it will start being slowed halfway to its destination.

Kett starships use FTL drives with a radically unique design. When traveling across smaller regions, such as a star cluster, these drives function almost identically to Milky Way drives, but over longer distances, they function like Alcubierre drives. This is similar to having an onboard mass relay, but compared to actual mass relays, kett drives are both slower and extremely inefficient. Traveling between clusters is still arduous enough that the kett rely on their own ark ships and stasis tech for such voyages.

Element zero FTL drives accumulate a static electrical charge when a vessel has been in FTL flight for some time. This charge steadily increases with the amount of time a vessel spends in FTL. Eventually, it must be discharged. The safe method involves discharging into a planet's magnetic field (for large ships, incapable of planetary landings) or actual surface contact (in the case of smaller vessels). Space stations and similar structures which are not located near planets are usually equipped with their own discharging facilities; the Citadel has dozens of these.

If the drive charge cannot be discharged, it will eventually accumulate to the point at which it discharges into the ship's hull. The heat will fry everything inside; fusing the bulkheads, destroying the electronics and killing all the crew members. 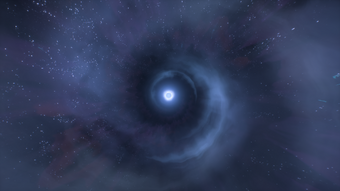 Light travels slower through glass than it does through open air; light also moves slower in conventional space than it does in a high-speed mass effect field. This causes refraction: any light entering a mass effect field will change in angle and be separated into a spectrum. Objects outside the affected ship will appear refracted. The greater the difference between the objective (exterior) and subjective (interior) speeds of light, the greater the refraction.

As the subjective speed of light is raised within the field, objects outside will appear to redshift, eventually becoming visible only to radio telescope antennas. High-energy electromagnetic sources normally hidden to the eye become visible on the spectrum. As the speed of light continues to rise, x-ray, gamma ray, and eventually cosmic ray sources become visible. Stars will be replaced by pulsars, the accretion discs of black holes, quasars, and gamma ray bursts.

To an outside observer, a ship within a mass effect drive envelope appears to have blue-shifted. If within a field that allows travel at twice the speed of light, any radiation it emits has twice the energy as normal. If the ship is in a field of about 200 times lightspeed, it radiates visible light as x-rays and gamma rays, and the infrared heat from the hull is blue-shifted up into the visible spectrum or higher.

Ships moving at FTL are visible at great distances, though their signature will only propagate at the speed of light. According to Engineer Adams, the SSV Normandy's stealth system does not work at FTL speeds because that blue-shifts the ship's emissions into frequencies too high to capture in the hull sinks.

The exact FTL speeds at which Milky Way and Andromeda starships travel are largely unknown. It is noted, however, that Reapers are believed to be capable of traveling nearly 30 light-years (283,821,914,177,424,000 meters) within a 24-hour period, and that this rate is roughly twice what Citadel starships are capable of traveling. This equates Reaper FTL capabilities to around 10,957 times the speed of light.

The Tempest ship of the Andromeda Initiative is capable of traversing 13 light-years per day.