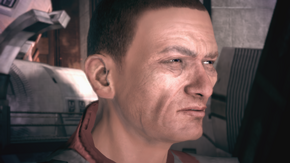 Fai Dan is the human leader of the Zhu's Hope colony, on Feros. He can be found near the crashed freighter Borealis. Fai Dan explains the situation on Feros to Commander Shepard, including details on the geth attack. Oddly, whenever the other colonists are asked about Zhu's Hope, they tell Shepard to go and ask Fai Dan, yet he is reluctant to discuss some subjects, especially Ian Newstead. However, he cares deeply for the colonists, and is anxious for Shepard's help.

Along with the other Zhu's Hope colonists, Fai Dan has been infected with the Thorian spores, but appears to have more autonomy than the others. The Thorian might have used him as a local "controller" for the colonists, exploiting him as he was their leader.

After returning from the ExoGeni headquarters and disarming the Thorian-controlled colonists at Zhu's Hope, Shepard's squad encounters Fai Dan, who approaches Shepard with a pistol while struggling to resist the Thorian's influence. He laments about the infection of the colonists, feeling responsible for what he felt was his duty to protect them as their leader. He points the pistol at Shepard, claiming the Thorian wants the Commander stopped. However, before Shepard can fire in self-defence, Fai Dan manages to overcome the Thorian's control and shoots himself in the head.

Retrieved from "https://masseffect.fandom.com/wiki/Fai_Dan?oldid=148310"
Community content is available under CC-BY-SA unless otherwise noted.