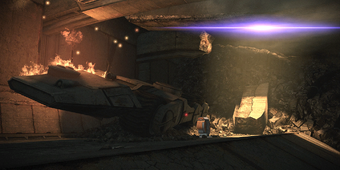 Davin Reynolds wants to solve the colony's food shortage by supplementing rations with varren meat. However, he cannot hunt safely until you remove the dangerous alpha varren.

Alternative journal entry:
You've killed what looks like the alpha varren. It's likely that someone back in Zhu's Hope will want to hear about this.

Speak to Davin Reynolds inside the freighter at Zhu's Hope. This can be done at any time after speaking with Fai Dan for the first time and killing the geth that interrupt the conversation.

Alternatively, this assignment can be acquired during or even after completing the main Feros mission by eliminating the alpha varren before talking to Davin.

Davin Reynolds can be found standing inside the crashed freighter Borealis (close to Ledra, the salarian merchant). Davin will tell Shepard that their food supplies are not sufficient. He suggests that they could supplement their resources with varren meat, but with the geth in the area and the presence of a particularly vicious male alpha varren, hunting them is impossible. The Commander can agree to help him with this.

The alpha varren is found in a small section of collapsed skyway attached to the tunnels. Head towards the elevator to the skyway, and continue down the stairs beyond it. Once in the tunnels several geth will need to be fought, if they have not been encountered already.

The alpha varren is through another set of doors, about halfway down the path that you are on. Upon going through the doors, a short cut-scene of some varren is shown. Kill all the regular varren and the alpha varren.

As the critters move fast and will charge you and your team, crowd control talents and Hammerhead Rounds in your shotguns will help keep them at bay. Additionally, none of the varren will move into the doorway area, so you can retreat there and safely pick them off.

Feros: Power Cells can also be accomplished/acquired by examining the fuel compartment of the crashed M29 Grizzly in the same room. When all of the varren are dead and you have nothing else to do in the room, leave the tunnels and report back to Davin Reynolds for the reward: morality points plus credits.

Warnings: If Davin is killed during Feros: The Thorian you can still acquire, but not complete, this assignment. If Davin is alive but Greta Reynolds died, he refuses to speak with you, making it impossible to complete the assignment.

Occasionally, after entering the varren's lair as part of this assignment, Shepard's squad-mates will cease to recognise the 'follow' command, standing stock still when not given orders to stand in a particular spot, and rush to engage enemies at point-blank / melee range instead of taking cover. This appears to be triggered by the cut scene which shows the varren waiting inside the lair, and often persists into the rest of Feros, making later enemies much more frustrating to fight.

One solution is to order your squad-mates to remain outside the varren lair (beyond the door) and fight the varren alone. This can be risky for Sentinel and Engineer classes, unless they have crowd-control bonus talents but you can avoid the risk by standing in the doorway yourself: the varren will not pass beyond the threshold.

It is also possible to restore normal squad-mate behavior by saving and exiting the game to the dashboard (Xbox) or desktop (PC), then re-entering and reloading. Another option is to head back to the Normandy and enter the ship and return.

The following assignments can also be completed while in the tunnels:

Retrieved from "https://masseffect.fandom.com/wiki/Feros:_Varren_Meat?oldid=510467"
Community content is available under CC-BY-SA unless otherwise noted.