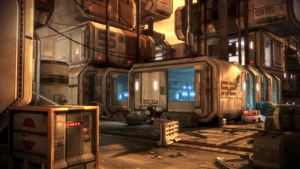 Firebase Ghost is a multiplayer map in Mass Effect 3. It is located in a slum on Benning in the Earth Systems Alliance Space zone of the galaxy map. In single player, the Galaxy at War mission N7: Cerberus Abductions takes places on this map.

Benning, the nearest garden world to Arcturus Station, is the station's primary food supply source and an important staging area for starship maintenance and repair. This makes reclaiming the planet a key part of any attempt to liberate the station, capital of the Systems Alliance.[1]

Mass Effect 3: Retaliation adds a version of Firebase Ghost that is set during an acid rain storm.

Periodically, acid rain will start to fall, doing small but steady damage to the shields or barriers of any player out in the open, but none to health. It will damage enemy shields and barriers, but this damage cannot be relied on.

A corner location that connects to several areas. Players begin and extract at this location.

Pod 52 is the only pod in this location.
Pod 52 is connected to Pod 9 by a small open air bridge.

There is an ammo dump up the ramp on the left-hand side from the starting position between some small concrete walls of cover.

Pod 9 is the only pod in this location.
Pod 9 is connected to Pod 52 by a small open air bridge.

A lower street with staircases and ladders leading to several pods.

There is an ammo dump on the left-hand side of the staircase leading up into Pod 7.

A series of habitat pods that run the central length of the map.

There is an ammo dump in the back corner of Pod 27 near a window looking down into Pod 7 and the back ramp looking out in the Back Street.

A back area near the Central Pod.

Pod 22 is the only pod in this location.

There is an ammo dump in very dark area between some open top blue bins and the left-hand side of the staircase leading up into Pod 25.