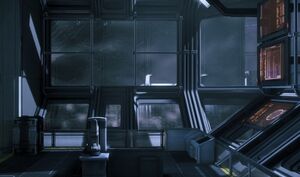 Firebase Glacier is a multiplayer map in Mass Effect 3. It is located on Sanctum. In single-player, the Galaxy at War mission N7: Cerberus Lab takes place on this map.

The taking of Khar'shan has driven the once-populous batarian colony of Lorek into a frenzy: Cerberus and Reaper units occupying the planet have met much higher resistance than on other planets. Lorek's forces are so skilled that they serve as a training camp for other troops fighting against the Reapers throughout the Omega Nebula.[1]

Mass Effect 3: Retaliation adds a version of Firebase Glacier that is set during a Seeker Swarm containment breach.

A massive Seeker Swarm travels around the map, causing heavy damage to anyone near it, friend or foe (with the exception of Collector forces).

An exterior multi-level area overlooking the facility. Players begin on the upper walkway and extract on the lower area.

There is an ammo dump located in the corner of the lower area.

There is an ammo dump located by the bank of windows overlooking the extraction zone.

A blind hallway and junction area.

There is an ammo dump located on a small platform next to the middle of the long staircase connecting to the Hub.

Retrieved from "https://masseffect.fandom.com/wiki/Firebase_Glacier?oldid=510491"
Community content is available under CC-BY-SA unless otherwise noted.