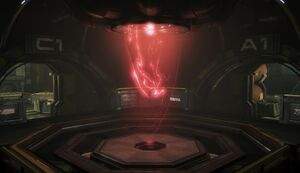 Firebase Reactor is a multiplayer map in Mass Effect 3. It is located on Cyone.[1] In single player, the Galaxy at War mission N7: Fuel Reactors takes place on this map.

The planet Cyone was assaulted more than a dozen times during the Krogan Rebellions by foes eager to gain access to its vast resources and specialized factories; however, it was never occupied by more than token forces before asari and turian allies drove the krogan out. Among the elite forces currently defending the planet are matriarchs that survived those attacks, and they have vowed that Cyone will never fall.

Mass Effect 3: Retaliation adds a version of Firebase Reactor that is set during a meltdown.

There is a slight red haze in the facility and portions of the reactor have visible electrical effects and additional moving parts. The Reactor Core area will periodically become filled with radiation and the players are able to vent the reactor.

The entrance to the plant at the upper level. Players begin and extract at this location.

There is an ammo dump on the wall directly behind the landing zone where the players begin and extract.

Upper level area that has a hallway that loops behind the main upper walkway.

Small multi-level area on the side of the map.

There is an ammo dump on the lower area in the right corner next to the large yellow vehicle.

The central power source for the facility.

Multi-level area that contains elevated walkway and a lower area.

There is an ammo dump on the wall near the large machine structures and computer terminals on the upper walkway section.

Multi-level area that contains elevated walkway and a lower area.

There is an ammo dump nestled into a dark recessed area behind a large angled pipe.

Very small area on the edge of the map containing a sunken walkway.