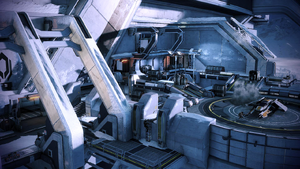 Firebase White is a multiplayer map in Mass Effect 3. It is located in a Cerberus base on Noveria in the Earth Systems Alliance Space. In single-player, the Galaxy at War mission N7: Cerberus Fighter Base takes place on this map.

The Horse Head Nebula is key to the southeastern front at the edge of human space, as the relay located there is the bridge between the human Exodus Cluster and the hanar homeworld of Kahje. Should the nebula fall, the Reapers will inflict massive casualties on the nearly defenseless hanar.[1]

Mass Effect 3: Retaliation adds a version of Firebase White that is set during a whiteout.

Landing pad with a Cerberus fighter docked. Players begin and extract at this location.

There is an ammo dump near the railing opposite and in-between the doorways leading into the Hallway.

There is a second ammo dump in the corner of the map on a small platform surrounded by railing.

Raised walkway that oversees the outside area of the map.

There is an ammo dump located against the railing in a dark area on the second mezzanine leading to the ladder up to the Landing Pad.

There is an ammo dump in the corner area of the lower stairwell leading to the doorway into the Interior.

Catwalk area at the back corner of the map.

There is an ammo dump in the corner area surround by railing behind some low cover.

Retrieved from "https://masseffect.fandom.com/wiki/Firebase_White?oldid=488786"
Community content is available under CC-BY-SA unless otherwise noted.