The First Contact War, referred to as the Relay 314 Incident by the turians, was a small, three-month conflict between the human Systems Alliance and the Turian Hierarchy.

After discovering the Charon Relay, humans began a rapid expansion thanks to their new-found connection to the mass relay network. Hoping to expand their territory and driven by immense curiosity about the galaxy, they began activating every mass relay they could find.

However, in 2157, their actions caught the notice of the turians, who found human explorers reactivating an inactive mass relay known as Relay 314. This was forbidden under the Citadel regulations after the Rachni Wars, but instead of negotiating, the turians opened fire. One starship escaped to warn the Alliance; a retaliatory force destroyed the turian vessels, and the situation quickly escalated into war.

To the turians, it was merely a police action against an ignorant species violating Council law; to humanity, it was their first encounter with another intelligent race - and it would shape their views of the galaxy for decades to follow.

The Occupation of Shanxi Edit 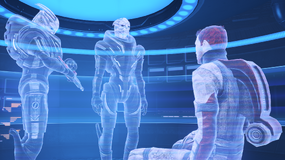 Not knowing what enemy they faced - at first, some even wondered if these aliens might be Protheans - humanity sent probes into turian space, armed with nuclear fusion warheads to prevent the probes from providing dangerous insights into human technology. With humanity's resources stretched thin due to exploration efforts, the turians managed to defeat several scout and patrol fleets. However, there were also extraordinary acts of human bravery. A soldier named Tadius Ahern was sent with a small squad to retrieve a data module, only to be beset by dozens of turian soldiers. With just a couple of defense turrets to assist them, a small strong point and no cover, Ahern and his men managed to fight the turians off for five minutes until their evac arrived.

Eventually the turians broke through to attack Shanxi, the closest human colony to the mass relay, and settled in for a protracted orbital siege. With the turians in a superior position, able to kill any human soldiers from above, the Shanxi defenders began to starve, unable to get food or supplies without risking civilian lives. Eventually General Williams, Ashley Williams' grandfather, was forced to surrender the Shanxi garrison.

The turians - who were also suffering logistical problems, as they had to ship in all their food - believed they had defeated the bulk of the enemy forces. But they would be proven wrong when a month later Admiral Kastanie Drescher led the Second Fleet against Shanxi, catching the turians by surprise and evicting them from the planet. The turians and humans prepared for full-scale interplanetary war, drawing the notice of the rest of the galaxy.

Fortunately, the Citadel Council then intervened to negotiate a peace and bring the war to an end. From the Council, humans learned of the existence of the Citadel, and that there were many more sentient species in the galaxy who co-existed peacefully. In the end, only six hundred and twenty-three human lives were lost with slightly more turian casualties. The only notable engagements were the turian attack on Shanxi and its subsequent liberation by human forces.

There were political and cultural ramifications for both sides. Humanity's first contact with an alien race would later create a bad reputation for humans on the galactic forum as aggressors, and created a climate of xenophobia amongst the Alliance public. This led to the emergence of extreme pro-human groups like Terra Firma and, later, Cerberus. Some of the nuclear-armed probes sent into turian space remained at large; their existence remains an Alliance secret that could result in political consequences from the Citadel if revealed. However, the First Contact War also demonstrated humanity's extraordinary military capabilities, which has drawn the interest of the Council.

For their part, the turians were ordered by the Council to pay heavy reparations to the Alliance. Veterans on both sides would harbour mistrust for a long time; Saren Arterius nurtured a hatred for humanity for the death of his brother and became an outspoken critic of human policy.

In recent years, though antagonism remains, relations have improved slightly. The two races are now trade partners, and the construction of the SSV Normandy, which was designed and built by engineers of both races, began to mend the antagonism between humans and turians.

In Mass Effect 2, if Commander Shepard chooses to save the Citadel Council in the first game, a news report can be heard claiming that the Turian Hierarchy is considering additional reparations to humans whose ancestors died during the Relay 314 Incident. Up until the Battle of the Citadel, the Turian Hierarchy had refused to pay interest on top of the reparations already paid. Alternatively, if the Citadel Council is not saved, various news reports suggest a resurgence of distrust between the two races, and a buildup of turian military forces in response to 'human aggression'.

Retrieved from "https://masseffect.fandom.com/wiki/First_Contact_War?oldid=519282"
Community content is available under CC-BY-SA unless otherwise noted.