Fist is the human owner of Chora's Den, and a known crime figure on the Citadel. The reporter Emily Wong becomes interested in his activities, but cannot obtain enough evidence to write her story because the krogan bouncer at the Den keeps her out.

Fist unwittingly found himself at the center of two factions: the Shadow Broker wanted him dead and Cerberus wanted the secrets Fist knew about the former. The deal was that Fist defects to Cerberus for asylum, but the Broker got wind of his activities and sent Urdnot Wrex to deal with him.

Fist attended to business matters one day complaining about a delinquent worker and instructed an underling to put the person on notice, unaware that his house was being infiltrated at the time and that he's being monitored by a mysterious figure from afar. Taking two krogan guards with him he boarded a shuttle back to his residence, where he left them posted outside his quarters.

He was confronted by a Cerberus agent named Rasa inside his apartment as soon as the door closed. Rasa looked at his files and determined that instead of accepting Cerberus' deal Fist sold out to a Spectre named Saren Arterius. The Cerberus agent demanded answers, and Fist's reply was simple: Saren made a better offer.

From his high-rise apartment Fist noticed Wrex marching to his location to kill him. Faced with waiting for the krogan to come to him or accepting Cerberus' terms, he suggested a third option.

Wrex burst into Fist's apartment and found it empty. Somehow, Fist was able to convince Rasa to let him go. In her mission report to the Illusive Man, Rasa said she only let him go to discover more about his connection to Saren, and was confident the krogan can take care of him before he compromised Cerberus.

As well as being a crime lord, Fist was formerly an agent of the Shadow Broker, but changes his allegiances to work for Saren Arterius; Dr. Michel comments that Saren must have paid very highly for Fist to take such a risk. The Shadow Broker retaliates by hiring the krogan bounty hunter Urdnot Wrex to assassinate Fist. However, Wrex is unable to do so as he is denied entry into Chora's Den by a bouncer.

Commander Shepard hears that Fist came into contact with a quarian who has evidence of Saren's treachery. Shepard and the squad raid Chora's Den and confront Fist in his office which is protected by turrets. Eventually, Fist surrenders and tells them that he sent the quarian to a nearby alleyway; he misled her into believing that she was going to meet the Shadow Broker but set her up with Saren's associates instead.

Fist pleads to be released, but Shepard holds Fist at gunpoint with the option of executing or releasing him — Fist promises he will vanish to hide from the Shadow Broker. However, if Wrex is in the squad, he kills Fist to fulfill his contract with the Shadow Broker regardless of what Shepard does. Shepard can find an OSD containing Fist's private files in his office and pass it on to Emily Wong. 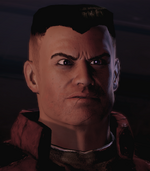 If Fist survived his previous encounter with Shepard, he starts a new life on Omega as a dockworker. Shepard meets him on the lower floor of the Afterlife Club, surrounded by a pair of asari. Fist angrily admonishes Shepard for ruining his life and making the effort of harassing him across the galaxy despite being a small time criminal. He also mentions his legitimate employment and tells Shepard to stop bothering him. If Shepard prods him again, he mentions that sometimes he likes to "get friendly with the whores" on his time off.