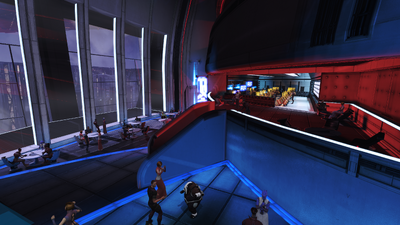 Flux is a newly-opened nightclub on the Citadel which has already become very popular. The entrance can easily be found from the Upper Wards, up a set of stairs just around the corner from the entrance to the Markets. It is owned and operated by a volus named Doran, with a human girl named Rita acting as waitress.

Flux has a bar and dance floor on the ground level, with a casino on the mezzanine. An asari and two salarians on the ground level can be heard gossiping on a variety of topics: first about the goings-on at Chora's Den, then the attack on Eden Prime, and finally humanity's growing influence on galactic politics. 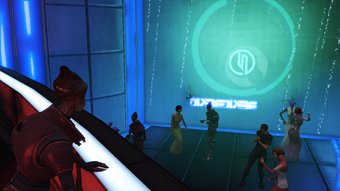 Commander Shepard can dance with a love interest in the dance floor. If the issue of Schells' gambling device has been dealt with, Doran can also be seen having a good time on the dance floor in the aftermath.

Rita's sister, Jenna, used to work in Flux until she started working for Fist in Chora's Den. She returns to Flux if her reasons for waitressing in the Den have been resolved.

The establishment's gambling machines are secretly being siphoned of credits. Following the trail leads to an artificial intelligence on the Presidium with its own aspirations of leaving the Citadel.

Following the enforced lockdown of the Normandy, David Anderson meets with Shepard in Flux to discuss busting the ship out to resume the overarching mission to stop Saren Arterius and the Reapers. Outside the nightclub, a twitchy diplomat is in need of stims and is looking for someone to procure one for him.

Note: This article features material from the first edition of Mass Effect: Deception, which BioWare has acknowledged contains discrepancies with other Mass Effect lore. Once revised editions of the book are released, this article will be updated.

Flux is one of the places Kai Leng goes to in his search for Hal McCann. He catches the attention of a girl named Marcy, a hairdresser and patron who flirts with him over drinks while wearing barely two strips of tube. Since his target isn't here according to Doran and Marcy, Leng departs and checks Dark Star Lounge next.