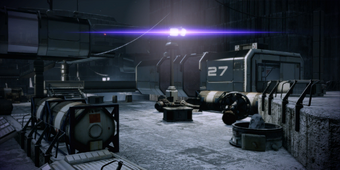 All the colonists of Freedom's Progress have mysteriously vanished. The Illusive Man would like a team to investigate the disappearances.

The mission is acquired automatically after your briefing with the Illusive Man.

Be sure to access the Armor Locker in the Cerberus Base and configure your armor to suit your play style. Unless it's your first playthrough, you're likely to have at least a few choices available.

Freedom's Progress is the third and final mission in the prologue, where Commander Shepard's embryonic team investigates the recently attacked colony of Freedom's Progress. Your mission is to recover any clues or information as to who is responsible, with help from newfound squadmates Jacob Taylor and Miranda Lawson.

You start in the shuttle, talking with Jacob and Miranda. When Jacob asks for specific orders, there are morality points available: you can get Paragon points for emphasizing looking for survivors, or Renegade points for prioritizing the mission over everything else. 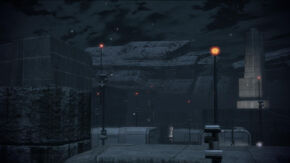 On arrival, be sure to check the Squad menu and assign your available points to powers. Proceed through the door and make your way through the colony, until you find a large door. To the left are some spare parts, which you can salvage for 1000 credits. Through the door, there will be two LOKI Mechs in front of you, and when they are defeated, two more appear to your right, which are accompanied by two FENRIS Mechs. A few seconds later, another LOKI mech will appear where the first two were.

Combat Strategy: For the first battle of a prologue mission, this can get surprisingly tricky on higher difficulty levels since the LOKI mechs flank the one obvious cover position and the FENRIS mechs approach relentlessly. You'll need to be quite nimble in switching directions and concentrating on the most threatening target. An alternative tactic if you're having trouble is run back through the door as soon as the enemies spawn and take cover in the previous area. There is a large pipe some distance back from the door where you can take cover, and you can place Miranda and Jacob to the right up on a small ledge. Enemies are not able to follow you through the door and you can pick them off at your leisure.

In the next building, there is a Med Kit with 1 medi-gel, and a Wall Safe worth 2000 credits. Outside, there will be one LOKI Mech and one FENRIS mech, and some salvageable spare parts worth 1000 credits.

Further on, your squad will run into Tali'Zorah vas Neema and a group of quarians under her command, all of whom express great distrust for Cerberus. Tali explains that their mission is to find Veetor, an unstable and sensitive quarian who came to the colony on Pilgrimage. They suspect that Veetor, nervous to begin with, must have suffered damage to his suit during the attack, with the subsequent infection causing him to become paranoid and reprogram the security mechs. The two squads decide to work together to find him. Demanding they lower their arms gets you Renegade points, and allows you to explain why you joined Cerberus ("No choice" gives Paragon, "For humanity" gives Renegade). Questioning whether Veetor is still alive garners Renegade points, as does telling them that you're taking charge and rejecting Tali's plan. For Paragon points, suggest cooperation and agree with Tali.

Outside, Tali will warn of security drones, which you will see fly past you. In the next building, one LOKI mech is bundled up next to a Wall Safe worth 2000 credits. The time it takes for him to stand up is enough to do significant damage. Outside again, two Assault Drones and one Rocket Drone will appear, and three more of the same will replace them after they are dead. Tip: If you're replaying and have Stasis it will destroy any drone you use it on.

Tali will contact you saying that Prazza and the other quarians went on ahead, despite her protests, in an attempt to locate and remove Veetor before Cerberus can question him. In the building on the right will be some ammo, and a Med Kit worth 100 credits, if your medi-gel is full. Proceed through the empty room on the left, then downstairs, where you'll run into two Assault Drones and one Rocket Drone, each with a back-up (same as last Drone incident). Tip: Quickly returning to the top of the staircase gives you the best cover for taking out the drones.

Around the stairs to the left is some ammo and some spare parts worth 1000 credits, and in the middle sits a 100-credit Med Kit. Proceed to the large gate and order your squad mates to take cover on either side of it, then hide yourself behind the obstruction in front of the entrance. Once in position, Tali will open the door remotely.

A YMIR Mech takes out almost the entire quarian team, then turns its attention to you. The mech is protected by shields and armor, and is equipped with a rocket launcher and machine gun. Do not expose yourself - its weapons can incapacitate you within seconds. Also, move from one piece of cover to the next, as the mech will destroy cover throughout the battle. The YMIR advances on your position and may flank you if caught off guard. One good tactic is to position your squad off to the right or in the doorways of the nearby buildings, then get its attention and simply dance around the cover you start behind. The mech should only focus on you, allowing your squad to damage it. Keeping large objects interposed between you and the mech as you move shouldn't be a problem given the mech's slow speed, and each time it finishes firing a rocket you have a moment to step out and take some quick shots. Staying on the move without getting fully "into cover" will help keep you mobile and avoid splash damage from the rockets.

Insanity Tip: Alternatively, especially on higher difficulties, you can run inside the building on the left or especially right, where you can take cover behind the low wall and the YMIR can't follow you. Starting behind your original cover, place your squadmates in the cover slightly behind you and to your right, and wait for the mech to walk down the ramp and towards you. When it gets close to your position, run around the left side of your cover and into the building, where you can position yourself behind cover. Waiting until the mech walks down the ramp will ensure that you take minimum damage during your sprint for the building, since the mech will have to turn to aim at you. Obviously powers such as Adrenaline Rush, Tactical Cloak, or using Stasis on the mech will all make this easier.

The mech will focus completely on you, leaving its back open for your squadmates; you will be completely safe from both its machine gun and grenade launcher as long as you stay crouched behind the wall, but you can pop your head up and help your squad out when the mech pauses between switching weapons. Once the mech is destroyed, check the building on the right for a Med Kit and on the left for Power Cells, and a Wall Safe with 3000 credits. Scan the damaged YMIR Mech in front of the objective building for a Heavy Weapon Ammo upgrade, and take collect the 2000 Iridium right next to it. Go up the stairs and into the building Veetor is holed up in.

Finish the mission by finding Veetor, who is babbling in a paranoid manner about monsters out to get him, and watching garbled footage on a wall of display screens. You will have either a Renegade interrupt option, consisting of shooting one of the screens, or a Paragon interrupt, which simply turns them all off with your omni-tool, depending on your first dialogue choice. Both get Veetor to stop muttering to himself, and to finally address you. Tali walks in shortly afterward. Veetor, though delirious, has managed to piece together footage from the colony's security cameras to reveal that the Collectors are behind the abductions. The group theorizes that Veetor was spared because the Collectors are only scanning for human vital signs, or are only interested in humans. Miranda will insist that the quarian be taken into custody for interrogation, but Tali insists he be taken back to the Flotilla for medical attention. The final decision rests with Shepard, after which the squad heads back to the Cerberus facility.

Note: In Tali's Loyalty Mission, Veetor has the option to testify on her behalf if he is allowed to return to the Flotilla.

Back in the Cerberus facility, after being debriefed by the Illusive Man, Joker is sent to meet with Shepard. He explains that he is now working for Cerberus. Finally, Shepard is introduced to and given command of the new Cerberus-built Normandy SR-2, after which both the mission and Prologue end and Shepard is for the first time given the freedom both to explore the Normandy and to move about the galaxy in it.

Collectors confirmed as source of attacks of Freedom's Progress.

Paragon: Quarian survivor Veetor returned with Tali'Zorah to the Migrant Fleet. Will examine his omni-tool data for anything useful.

Renegade: Quarian survivor Veetor will be interrogated and released to the Migrant Fleet once we are satisfied he has provided all available information.