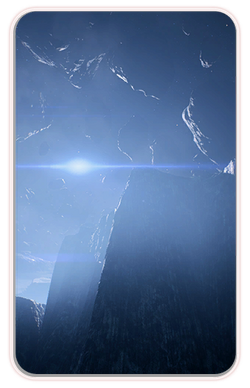 A group of outlaws are on the H-047c mining helium-3, a potentially dangerous explosive substance. You've also found a partial passcode to their main base. To learn the extent of their plans, locate the rest of the passcode.

Straight to the west from the landing zone in Cocytus Plateau is a mining site protected by a domed orange energy shield. Reading a datapad (marked with a

) in a building inside the dome begins this mission.

Upon entering the dome using the Nomad Airlock (marked with

), Ryder is attacked by Outlaws. Defeat the outlaws and explore the dome.

There is a terminal in the building:

After reading the datapad, the mission and two objectives are added. Navpoints

will be added to three locations. Any of the objectives and areas can be visited in any order but all must be visited to gain the passcode to enter the second dome at the outlaw Headquarters.

The outlaw headquarters is located in Crater: Agneta. There are two domes that are connected by an airlock that requires the passcode to open. Outlaw enemies will attack Ryder. Ryder can clear the first dome without the passcode but the passcode is required to enter the second dome.

Note: If you clear out the first dome before obtaining all of the code snippets, and then return when directed by a new objective, the enemies will respawn in the first dome and have to be defeated again.

There is a datapad with a message to Krex and another segment of the passcode.

There is a terminal in the building:

There is a terminal outside the building:

In the building are two datapads:

When all parts of the passcode are collected, a new objective will be added with a navpoint in Crater: Agneta.

Defeat the outlaws in the first dome. The use the passcode to open the airlock leading to the second dome and the HQ.

Defeat the outlaws and the leader Krex.

There are three lootable containers. There are many titanium nodes in the second dome.

The Scaler can be scanned for +10

. There is an Adapted Initiative Core Tech that can be scanned for +100

There is a Loadout terminal

Listening to the audio recording on a datapad in the upper portion of the building makes it clear that someone named Elora obviously is the one Krex was working for. Her plans are to destroy the Initiative's colonies using bombs made of helium-3. Fortunately the plans are on a halt because there is some Remnant machine the outlaws haven't been able to start.

SAM's analysis leads to the conclusion that with the production of helium-3 up and running the Nexus' ships would have fuel supply for the next 368 years.

The mission completes and the follow-up mission The Remnant Tiller starts automatically.

Before this mission, Elora can be found at the wind farm on Kadara (where the missions Gone with the Wind and A Packaged Deal begin), talking to Yuri. After this mission Elora will be missing. Talking to Yuri reveals that the leader of Kadara Port discovered what Elora was up to, and wasn't pleased. If it's The Charlatan, Elora was exiled to Elaaden, where she wasn't expected to survive. If it's still Sloane Kelly, it's implied that Elora was simply killed.

Retrieved from "https://masseffect.fandom.com/wiki/From_the_Dust?oldid=516832"
Community content is available under CC-BY-SA unless otherwise noted.