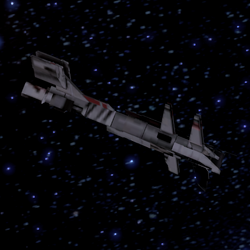 A Fuel Depot is a massive structure used for the storage of fuel. This can be purchased by a ship's captain. Fuel is expended when a ship travels between systems in a cluster, and as such requires replenishing. It costs 1 credit per unit of fuel.

In Mass Effect 2, fuel depots also sell probes. Probes are used to discover landing sites, and to extract valuable minerals from unexplored planets. They cost 100 credits for 5 probes. The game charges 100 credits even if 5 probes would put you over your maximum capacity. Fueling can be interrupted by flying away from the depot.

If the player runs out of fuel, EDI will expend a quantity of a valuable mineral to fly the Normandy SR-2 to the nearest fuel depot.

The locations of the fuel depots are:

Note: If the player runs out of credits while refueling, refueling will continue as normal at 1 credit/unit to the maximum 1000 or 1500 units with the Extended Fuel Cells upgrade, leaving the account with a negative balance. However, if the player begins refueling with a negative credit balance, the fuel depot provides fuel at no charge, though probes cannot be purchased.

In Mass Effect 3, due to the Reaper invasion, many fuel depots have been destroyed. Scanning will detect destroyed fuel depots, from which 50 to 800 units of fuel can be recovered. Intact fuel depots can still be found in certain systems.

Running out of fuel in Mass Effect 3 instantly transports the Normandy to the nearest system with a mass relay, locking out non-mass-relay travel between systems until the player refuels.

The locations of the fuel depots are in the systems that contain the mass relays of the following sectors:

Retrieved from "https://masseffect.fandom.com/wiki/Fuel_Depot?oldid=508050"
Community content is available under CC-BY-SA unless otherwise noted.