A starship's General ARea Defense Integration Anti-spacecraft Network (GARDIAN) consists of anti-missile and anti-fighter laser turrets on the exterior hull. Because these are under computer control, the gunnery control officer needs to do little beyond turn the system on and designate targets as hostile.

Since lasers move at light speed, they cannot be dodged by anything moving at subluminal speeds. Unless the beam is aimed poorly, it will always hit its target. In the early stages of a battle, GARDIAN fire is 100% accurate. It is not 100% lethal, but it doesn't have to be. Damaged fighters must break off for repairs.

Lasers are limited by diffraction. The beam 'spreads out', decreasing the energy density (watts per m2) the weapon can place on a target. Any high-powered laser is a short-ranged weapon. GARDIAN networks have another limitation - heat. Weapons-grade lasers require cool-down time, during which heat is transferred to sinks or radiators. As lasers fire, heat builds within them, reducing damage, range and accuracy.

Fighters attack in swarms. The first few will be hit by GARDIAN, but as battle continues, the effects of laser overheat will allow the attackers to press ever closer to the ship. Constant use will burn out a laser. 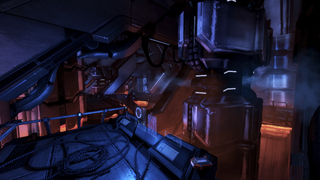 GARDIAN lasers typically operate in infrared frequencies. Shorter frequencies would offer superior stopping power and range, but degradation of focal arrays and mirrors would make them expensive to maintain. Most prefer mechanical reliability over bleeding-edge performance where lives are concerned. Salarians, however, use near-ultraviolet frequency lasers with six times the range, believing that having additional time to shoot down incoming missiles is more important. Similarly, the geth have also been known to use ultraviolet frequency, with one of their dreadnoughts being capable of carving through multiple quarian ships in the battle over Rannoch.

Lasers are not blocked by the kinetic barriers of capital ships (bar the ones employed by the Reapers, whose barriers are capable of blocking them to an extent). However, the range of lasers limits their use to rare 'knife fight'-range ship-to-ship combat.

Systems Alliance frigates are equipped with GARDIAN systems; a Codex entry is gained from examining the gunnery station on the SSV Normandy's bridge. Due to her unique stealth system that allows her to evade enemy contact, the Normandy has not needed to rely on her GARDIAN too heavily as of yet.

The SSV Iwo Jima was also equipped with GARDIAN, which allowed her to destroy an enemy rover on a planet's surface. However, when a mass accelerator cannon was fired at her hull, the GARDIAN was unable to handle so many tiny projectiles fired at short range. Because the Iwo Jima had dropped her kinetic barriers to land, the projectiles ripped through her hull and she was quickly shot down.

GARDIAN laser turrets are also known to be used as ground defenses; their range, accuracy, and power make them effective against the weak, lightly armed, frigate-sized vessels usually employed by pirates and slavers. The Alliance deployed several of these turrets to the colony of Horizon when it was suspected that slavers in the area had been abducting human colonists.