Mass Effect 2
Mass Effect 3
Gabriella "Gabby" Daniels is a former Alliance engineer. She is a Cerberus operative in the Lazarus Cell and an engineer aboard the Normandy SR-2 in 2185.

Engineer Daniels works in the engine room along with her best friend, Kenneth Donnelly. They graduated from the same class at a tech academy and served aboard the SSV Perugia at the Battle of the Citadel. After the battle, when the Alliance discredited the existence of the Reapers, Kenneth openly voiced his defense for Commander Shepard, which led to his recruitment by Cerberus. Gabby insisted to Kenneth that she be included in the contract as she felt he would fall apart without her.

Gabby loves starships engines and she couldn't pass up the opportunity to serve aboard the Normandy SR-2. She works on the engineering deck, next to Kenneth. Gabby frequently chats with Kenneth about new ship upgrades or new crew members; She scolds Kenneth every time he makes a sexist comment; after Jack has been recruited, she teases Kenneth about the newest crew member who wears nothing but tattoos from the waist up, only to tell him that she is a psychopathic murderer after Kenneth intends to introduce himself to Jack. When she is asked by Shepard whether she requires anything, Gabby mentions an upgrade that would ease her maintenance workload.

Gabby is among the Normandy crew members abducted by the Collectors when they invade the Normandy, and she will die if Shepard and the squad take too long to rescue the crew. 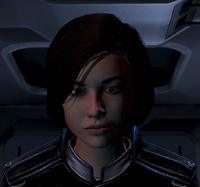 If she survived the events of the Collector attacks, Gabby is taken into custody when the Alliance impounded the Normandy. Shepard can free her to return to work in the Normandy's engine room by using their Spectre status.

At some point during Normandy's "downtime" in 2186, Gabby and Ken were both approached by Cerberus, but heeding Gabriella's intuition they both refused the offer.

Gabby and Kenneth both get to work on the engineering deck, resuming their old activities on the Alliance Normandy SR-2. They frequently chat about their present and past adventures, with Kenneth occasionally making sexist comments about other women, and Gabby scolding him.

Chief Engineer Adams describes Gabby as a very talented person who knows propulsion theory better than most physicists he has met. He expresses his gratitude to Shepard for getting her on the team.

If recruited, and provided both survived, she and Kenneth can enter a romantic relationship at Shepard's prompting (if Shepard sides with Gabriella in the argument). Gabby accuses Kenneth of commenting on other women but never once appreciating her. Kenneth is reluctant to start a relationship, believing it would impact the mission. If Shepard sides with Gabby, she and Kenneth can be later "caught" in the sub-deck.

Retrieved from "https://masseffect.fandom.com/wiki/Gabriella_Daniels?oldid=457082"
Community content is available under CC-BY-SA unless otherwise noted.