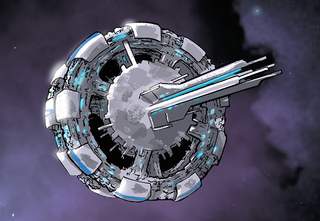 Gagarin Station (named after Yuri Gagarin, the first human to orbit Earth and colloquially known as Jump Zero) used to be the furthest human-made structure from Earth in the decades before discovery of the Charon Relay. The station came to be known as Jump Zero, because it was the launching point for early failed attempts at faster-than-light travel before mass effect field technology was developed.

Gagarin Station was used for deep space telemetry, exploration, and for conducting experiments too dangerous to do near more expensive assets. In the early years of biotic research, the station served as a safe place to evaluate emergent biotic humans. In rare circumstances, alien experts were brought in to assist in training, as humans lacked experience in the field, although that was not common knowledge. During the BAaT training programme, the station was taken off the extranet for security reasons, to keep the subjects isolated. After initial biotic training was completed, the Alliance used Jump Zero for AI research. The Alliance's first experimental AI, Eliza, achieved sentience there.

In 2183, Gagarin Station has a permanent population of approximately 9,000. A plan has been proposed to move it to the gravitationally stable barycenter point between Pluto and the Charon Relay, allowing it to serve as a gateway facility between the Sol and Arcturus systems. The high cost of safely moving its mass has delayed this indefinitely.

Retrieved from "https://masseffect.fandom.com/wiki/Gagarin_Station?oldid=470685"
Community content is available under CC-BY-SA unless otherwise noted.