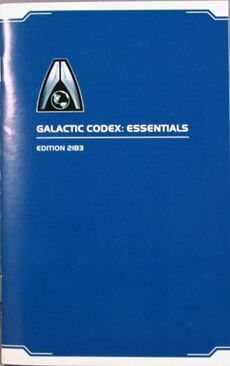 It contains some of the information in the in-game Codex with some additional data, particularly on the Citadel races, the history of Citadel space and humanity's expansion from Earth, notable corporations and a greater insight into biotics.

While the print codex was based on BioWare's game documentation, it was actually written by Microsoft. Not all documents they were provided with had been properly updated. When the in-game codex and print codex contradict (for example, the current location of Gagarin Station), defer to the in-game codex.

Retrieved from "https://masseffect.fandom.com/wiki/Galactic_Codex:_Essentials_Edition_2183?oldid=451650"
Community content is available under CC-BY-SA unless otherwise noted.