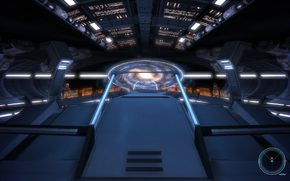 The Galaxy Map is an interactive holographic tool used for navigating the Milky Way/Andromeda. It is located on both the SSV Normandy and Normandy SR-2 in the Combat Information Center, behind the cockpit and ops stations. On Tempest it is located on the north side of the bridge. Only the CO can access the map and change the ship's course. There are several layers to the map, in increasing detail:

The Galaxy Map also has details of individual planets once one has been selected, including relevant statistics (temperature, gravity, orbital period etc.) and any historical points of interest relating to that world.

Since mass relays function as a network in Milky Way, ships must change relays repeatedly to cross to the far side of the galaxy. The Galaxy Map automatically calculates the paths necessary to reach the desired location.

In Mass Effect, even if a planet is too dangerous to land on, many can be surveyed to search for valuable resources and assignment-relevant items. Systems may also contain asteroids, which can be scanned by sweeping an asteroid belt with the cursor, and points of interest like derelict spacecraft. Over one hundred planets can be examined, yet only a few can be explored on foot due to most being non-terrestrial or too inhospitable. As only the ship's commanding officer is permitted to use the Galaxy Map, Commander Shepard may not access the map while Captain Anderson is aboard.

In Mass Effect 2, planets can be scanned for resource deposits and mined by probes. Scanning and deploying probes can also locate assignments. In addition, traveling between the various systems of a cluster requires fuel, which can be purchased at Fuel Depots. If the Normandy SR-2 expends all of its fuel, a quantity of a resource (element zero, platinum, palladium, or iridium) is consumed and the Normandy is returned to the cluster's gateway system. If the Normandy has no resources and expends all of its fuel, EDI simply engages emergency FTL thrusters to return the ship to the gateway system without any penalty.

In Mass Effect 3, the Galaxy Map experiences significant changes: first, some star clusters now have an icon above them which indicates the clusters are currently being invaded by the Reapers. In addition, resources are now obtained by activating a scan while exploring individual star systems and subsequently investigating red 'blips' from the scan. Scans only cover a limited area around the Normandy, so it may be necessary to scan several locations in a star system to locate all available loot. Resources now include possible fuel or credit rewards, as well as certain assignment objectives and War Assets (see Mass Effect 3: Galaxy at War).

If the player scans multiple times in systems which are being invaded, they may eventually attract the attention of Reaper ships, which will chase the player around the star system. Leaving the star system or activating a mass relay is sufficient to evade the Reaper ships. Reaper ships will continue to patrol a star system in which they detected the Normandy, chasing them again if they re-enter the system, until a certain amount of time (completed missions) has passed. Note that if Reapers are currently chasing the Normandy and the player investigates a planet or other feature, time effectively stops and the Reapers won't get any closer until the player zooms out again.

Fuel is required to travel between the various systems of a cluster and if all the fuel has been expended, you will be returned to the gateway system.

In Mass Effect: Andromeda you have access to the Heleus Cluster of the Andromeda Galaxy. There are several planets that can be landed on and explored as the story progresses. Planets can also be scanned for resources or to further various missions.

Retrieved from "https://masseffect.fandom.com/wiki/Galaxy_Map?oldid=510472"
Community content is available under CC-BY-SA unless otherwise noted.